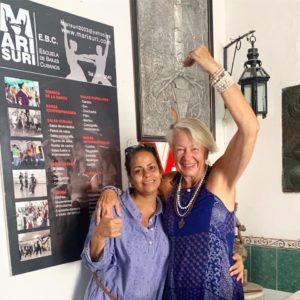 I decided to spend close to a month in Cuba, to learn to dance the Salsa in the country from which elements of it originated. It was an interesting experience, learning more about Cuban music, that Salsa is a ‘commercial’ overarching name for a dance incorporating steps from a number of other dance styles, and that I had to come to the conclusion that I do not like most Cuban Salsa music. I was told that Salsa has no age limit, one never being too old to dance, it even being used remedially with older persons.

END_OF_DOCUMENT_TOKEN_TO_BE_REPLACED

*   Good news for long-haul travellers from the UK is the announcement by its government that from April 2015 the Air Passenger Duty will decrease, with the tax falling away on all flights with a destination less than 2000 miles from London, and the tax to be levied on destinations 2000+ miles from London will be at a lower rate. The UK has the highest departure tax ‘in the Western world‘, which has increased by 470% since 2007!  It also is the country with the second worst rated air tax and airport charges in the world!

*   Metrorail is to receive R233 million from the Transport Ministry to address its commuters complaints: too few trains, not frequent enough, not punctual, dirty, broken carriage windows, infrastructure problems at Cape Town station, lack of security, and no communication about delays, reports the Cape Times.   Upgrades to track infrastructure will also be addressed.