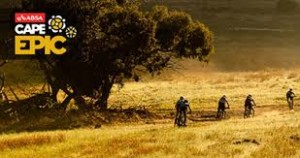 Today the 11th ABSA Cape Epic gets off the ground, the world’s ‘premier mountain biking challenge’, according to the Weekend Argus. A total of 1200 riders will participate in the tough 718 km race, described on its Twitter Bio as ‘The Untamed African Mountain Bike Race’, covering a unique route each year.  It receives extensive local and international media coverage, attracting attention to the rugged beauty of the Winelands.

Cape Epic organiser Kevin Vermaak had the vision to create a cycle challenge from Knysna to Cape Town over eight days, beginning with 200 riders in 2004.   Today the race starts at Meerendal wine estate in Durbanville, and the journey takes the riders through Arabella Wines in Robertson, The Oaks in Greyton, Oak Valley wine estate in Elgin, and finishes off on 30 March at Lourensford  wine estate in Somerset West.   A tent village is set up for the riders at the end of each day.

The race has a total prize value of R1,7 million, and the prize for the fastest woman rider has been increased to R690000.  Famous participants today are Formula 1 world champion Alain Prost; former Springbok rugby captain John Smit and former Springboks END_OF_DOCUMENT_TOKEN_TO_BE_REPLACED

*  SA Tourism is representing our country on two platforms at World Travel Market in London this week: the 20th anniversary of the ‘new’ South Africa as well as Cape Town’s role as World Design Capital, both in 2014. Today Marthinus van Schalkwyk, the Minister of Tourism, will address visitors to the SA Tourism stand, and a fashion show will represent our country’s eight World Heritage sites, interpreted by top local designers  David Tlale, Marianne Fassler, Thula Sindi, and Nkhensani Nkosi.

*   2014 is also an important year in celebrating the 80th anniversary of the SA Rugby Union and the Springboks.  SAA will participate in the celebration in February, and commuters can expect to rub shoulders with members of the Springbok team at airport lounges.  In November next year the team members will be seen at OR Thambo and Heathrow airports, when the Springboks travel to Europe for the Castle Lager Outbound Tour Series. (received via SAA newsletter)

*   SAA is cutting its Buenos Aires route, being one of its loss-making destinations.  Its Beijing route is also making a loss, but will be retained currently as China and South Africa are both BRICS countries.

*   Western Cape Minister of Tourism Alan Winde is seeking an urgent meeting with SAA to discuss the cancellation of its Buenos Aires route, having seen good growth in the past few years, and benefitting the Western and Eastern Cape in particular. (received via media release frorm Minister Winde’s office)

END_OF_DOCUMENT_TOKEN_TO_BE_REPLACED

*   The next London Wine Fair will be held from 2 – 4 June 2014, somewhat later END_OF_DOCUMENT_TOKEN_TO_BE_REPLACED

Tourism in Cape Town will enjoy a double whammy at the start of the World Cup, with FIFA’s Local Organising Committee and the South African Rugby Union reaching an agreement which will allow the rugby test match between the Springboks and the French team to be played at Newlands on Saturday 12 June, reports the Cape Argus.

According to the FIFA rules, no other sporting events may take place from 24 May onwards, to ensure that they do not drain any host city’s infrastructure, and its ability to host the World Cup.  As the rugby test match will not be played on a FIFA match day in Cape Town, permission was granted for the test match.

Cape Town can be expected to be invaded by French rugby and soccer fans in June, as the French soccer team plays Uruguay on Friday 11 June, the World Cup starting day, and the French rugby team plays the Springboks on Saturday 12 June.

The good bookings could be a signal that the worst of the economic crunch is over, and it is encouraging that the guest mix consisted of Italians (August traditionally is their holiday month, and they seem to favour South Africa as before), British visitors, and of  South Africans.

In Cape Town the Springboks played against the Wallabies at Newlands over the weekend, while in Hermanus the Kalfiefees and the Hermanus Food & Wine Fair took place.

Franschhoek was largely taken over for the long weekend by one of the largest law firms in South Africa, Edward Nathan Sonnenbergs, and Whale Cottage Franschhoek accommodated the band Watershed, which performed at the company’s function.   More than 300 staff and their families spent the weekend in Franschhoek, as the company’s way of thanking its staff for their contribution to its success. 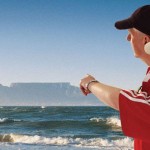 The British and Irish Lions rugby tour team has arrived in South Africa, to take on various local sides as well as the Springboks in the Castle South Africa 2009 Lions series.

The double page spread full colour ad for the Series has a banner “The Hunt for Glory”, and details the matches against the Lions team as follows:

30 May:  Royal XV in Rustenberg

10 June: The Sharks in Durban

“Boktowns” have been created, according to the ad, and in Cape Town it is La Med in Camps Bay, Montecasino in Johannesburg, the Suncoast Casino in Durban and the Springbok Bar in Pretoria.

The tourism effect of the rugby series is clear, with Whale Cottage Camps Bay close to fully booked for the two Cape Town matches.   This is contrary to the IPL, which benefit was not experienced in Camps Bay at all.