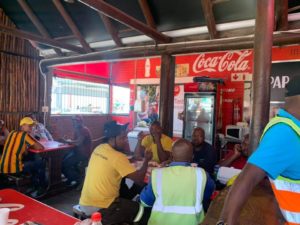 Many tourists have heard of Mzoli’s in Gugulethu, a butchery which barbecues one’s meat, and then one eats it in a dining section, usually accompanied by township music, especially on Saturdays, when it is said to become very festive. On Friday I experienced Mzoli’s as well as Nomzamo Butchery in Langa, offering a similar service. Neither of these were very good nor would be likely to appeal to the taste and hygiene standards of a tourist! END_OF_DOCUMENT_TOKEN_TO_BE_REPLACED

*  WOSA (Wines of South Africa) CEO Siobhan Thompson has described the wines of our country as using ‘fusion wine-making’, the ‘newest generation of wines‘ being made with confidence in the END_OF_DOCUMENT_TOKEN_TO_BE_REPLACED

*   SAA is pursuing a new procurement policy of aircraft parts, services, and supplies from ‘Black industrialists’.  A funding pool is to be established, to help such industrialists to set up their businesses.

*   All passengers travelling with children, arriving in or departing from one of our country’s airports, are subject to the new Immigration Regulations from 1 June onwards.  This applies to South Africans too, and not just to END_OF_DOCUMENT_TOKEN_TO_BE_REPLACED

*   Due to a cracked silo storing 10000 tons of coal, Eskom has announced load-shedding from today onwards, which is END_OF_DOCUMENT_TOKEN_TO_BE_REPLACED

*   Western Cape Tourism Minister Alan Winde has announced the launch of a R6,5 million Design Innovation Seed Fund to kickstart its new Design Park, to find the province’s next Mark Shuttleworth.  The Design Park will be housed in the Cape Craft and Design Institute.  Applications for funding to make local design ideas a reality are now open to students, entrepreneurs, and small businesses.  The value of the Cape’s design industry is R14 billion, which could rise to R20 billion with the launch of the Fund, and employ 14000 persons, said Minister Winde. (received via media release from Minister Winde’s office)

*   Kleine Zalze Wines  has appointed Alastair Rimmer as its new winemaker.  He studied viticulture in Stellenbosch, and has worked locally at Overgaauw, Agusta, Vergelegen Wines, and Darling Cellars, as well as internationally at wineries in Spain, California, Australia, and in New Zealand. (received via media release from Manley Communications)

*   The Reserve Bank has increased the repo rate by 25 basis points, giving a new interest rate of 5,75%. Governor Gill Marcus blamed inflation for the rate increase.

*   Brazil welcomed more than 1 million visitors during the Soccer World Cup, almost double the estimated 600000 travelers.  Most tourists had never been to Brazil before, visiting from more than 200 countries.  The infrastructure and tourism services generally, and the hospitality and cuisine specifically, were praised by the visitors.  The soccer matches were seen by 3,4 million soccer fans in the stadia over the month-long event.  Visitors stayed in Brazil for 13 days on average.   Brazilians were good soccer fans too, more than 3 million travelling around their own country during the soccer tournament.

*   Melanie Verwoerd has compiled a book ‘Our Madiba: Stories and Reflections from those who met Nelson Mandela‘, containing short stories of numerous persons that met the late Nelson Mandela, including Pieter-Dirk Uys/Evita Bezuidenhout, Adam Small, Francois Pienaar, Amanda Strydom, Sir Richard Attenborough, and many by Mrs Verwoerd herself.

*  Globally spirit sales barely grew in 2013, after a growth of 6,5% between 2007 – 2011. Vodka is the largest selling spirit category, at 496 million cases.  Whisky/whiskey sales grew the fastest, and stand at 361 million cases. Rum sales were 146 million, a decrease on the year prior.  Whilst the largest market for spirits is Asia, at 1,9 billion cases, growth was minimal.

*   More than 70 World Design Capital 2014 projects are on display in the Civic Centre as the project reaches its halfway mark, reports the Cape Times.  The projects on display include the MyCiTi Bus, Green Point Urban Park, and the Buitengracht Pedestrian Bridge.  There is no entrance fee to view the display, which runs until the end of this year.

*   Millennials will be the travelers of the future, being the biggest tourism spenders in the next 5 – 10 years, and already END_OF_DOCUMENT_TOKEN_TO_BE_REPLACED

*  Michelin star Chef Heston Blumenthal’s The Perfectionists Café has opened at the new Heathrow Terminal 2, serving burgers, fish and chips, and pizzas prepared in the first ever wood-burning oven in an airport, as well as molecular liquid nitrogen ice cream.

*   American travellers are booking last-minute, something that became a habit in 2008 during the economic crisis, but has remained and is now a booking trend, despite the recession being something of the past.

*   Tourists often are better informed about the tourism attractions and highlights of a city than are the local residents of the city, given their ability to use technology to garner information about and make bookings for the destination that they are visiting.  Nick Hall, Head of the Digital Tourism Think Tank, says: ‘So, what we have witnessed so far will accelerate. We can expect far more change, far faster. In this light the rise of mobile technologies is poised to change the industry as much as it has already. Visitors will be innately digital. They will be hyper-informed and seamlessly connected throughout their travel. The challenge this poses to existing tourist businesses is immense, as is the opportunity it holds out‘.  While technology is important, tourists still want the ‘reality of the experience, not the virtual reality’.

*   Professor Russel Botman, Rector of the University of Stellenbosch and Chairman of the Board of Cape Town Design NPC, the company which is administering Cape Town’s hosting of World Design Capital, has passed away.

*   ‘Enter the Ninja‘ by Die Antwoord, one of South Africa’s most successful groups, stars in the TV commercial for Dior Addict.   Lien Botha has written an interesting evaluation of the use of Die Antwoord’s music in the commercial, based on a collage of different views.

*   MyCiTi Bus fares increase today, the minimum cost being R 4,80 and the maximum peak fare being R8,90, both for a 5 km distance on a Mover package, now seemingly charged on a distance basis.  The MyConnect card cost increases from R25 to R35, a 40% increase!  The City of Cape Town media release states that every effort has been made to contain the rate increase, END_OF_DOCUMENT_TOKEN_TO_BE_REPLACED

*   The price of petrol will drop by 15 cents a litre on Wednesday, well-timed with Election Day some say cynically!

*   MasterChef Australia, for many South Africans the benchmark of  MasterChef programs, is facing the threat of being closed down if audience numbers don’t improve in its sixth season.

*   The ANC is taking the City of Cape Town to court over its new logo, claiming that there was no public participation process for its approval.  The City had previously announced that the new logo would not be implemented until after the election on Wednesday, but it is being used on all new communication material already!  The cost for its design is also being disputed by the political party, for being exorbitant!

*   A Canadian wine writer chose Mulderbosch Cabernet Sauvignon Rosé (no vintage revealed) as one of nine Rosé wines from around the world, and a (KWV) Cathedral Cellar Chardonnay 2012 for one of his four white wine recommendations.

*   Franschhoek has been named as our country’s favourite Winelands destination, and the third most popular END_OF_DOCUMENT_TOKEN_TO_BE_REPLACED