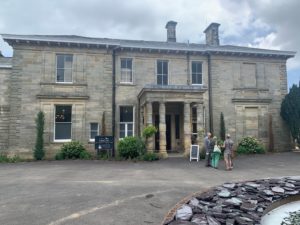 Last Thursday my son and I visited Leonardslee Lakes & Gardens in Horsham, West Sussex, in the UK, on my first day of visiting the country. I loved seeing Chef Jean Delport, previously working at my then favorite restaurant Benguela on Main in Somerset West, and enjoying his creative take on Afternoon Tea at the estate.
END_OF_DOCUMENT_TOKEN_TO_BE_REPLACED

*   The next London Wine Fair will be held from 2 – 4 June 2014, somewhat later END_OF_DOCUMENT_TOKEN_TO_BE_REPLACED

The good bookings could be a signal that the worst of the economic crunch is over, and it is encouraging that the guest mix consisted of Italians (August traditionally is their holiday month, and they seem to favour South Africa as before), British visitors, and of  South Africans.

In Cape Town the Springboks played against the Wallabies at Newlands over the weekend, while in Hermanus the Kalfiefees and the Hermanus Food & Wine Fair took place.

Franschhoek was largely taken over for the long weekend by one of the largest law firms in South Africa, Edward Nathan Sonnenbergs, and Whale Cottage Franschhoek accommodated the band Watershed, which performed at the company’s function.   More than 300 staff and their families spent the weekend in Franschhoek, as the company’s way of thanking its staff for their contribution to its success.