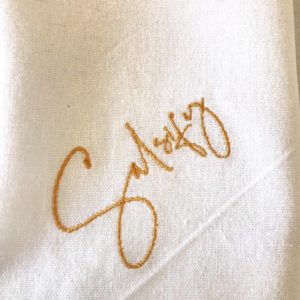 My Parisian friend Aurélie Jullien is nearing the end of her holiday in Cape Town, and being a restaurant lover too, she is anxious to fit in her last eating experiences in our city. Just as I was about to head off for a morning walk, she messaged me, suggesting lunch at the newly opened Chef Luke Dale-Roberts restaurant Salsify at the Roundhouse in Camps Bay. It was an amazing experience, a marriage between classical heritage, crazy wall art, and classic cuisine with modern twists.  END_OF_DOCUMENT_TOKEN_TO_BE_REPLACED 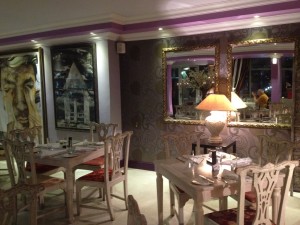 I am an occasional attendee of the ‘Brutal Review of Restaurants’ Facebook group, which is the initiative of Dirk Odendaal, owner of 17 on Loader Street in De Waterkant.   An invitation to attend an evening at the new 6 Spin Street Restaurant (it opened two months ago) was accepted immediately, even if it meant that I only arrived after the City Hall classical concert had finished at 22h15.   It is a restaurant in a setting with a difference, with excellent food.

Spin Street is hard to find the first time, yet it is a street most of us have driven past a million times, except that we did not know that this short section of the road near the Groote Kerk and opposite Church Square is called Spin Street.  The street is one of the oldest in Cape Town, and was once the home of a short-lived silk spinning industry.  The building in which the restaurant is housed was once the home of the South African Association bank, with vaults in the basement, the safety deposit boxes still in place.   When one steps inside the massive entrance hall, one enters IDASA’s Cape Town Democracy Centre, and sees the bookshelves of its book shop Lobby Books, and the tables of the restaurant.   The ‘marriage’ between the restaurant and the bookshop has led to a shared ethos: “eat.drink.talk.read.think”.

The Brutal Reviewers were in a cosy room, a perfect size for the group of 10.  The 1902 Sir Herbert Baker building has high ceilings, and the room used by the Reviewers had copper light fittings, reminding one of Five Flies.

I arrived as the Reviewers were taken on a guided tour, and were in what is the seminar room, with a fascinating piece of art – a “windswept” chandelier with a flying archbishop hanging on to it for dear life (the artist has intended it to depict that the Archbishop is “having the time of his life”) – called simply “Arch”.   It is a real conversation stopper, especially as one does not know how the artist Ed Young managed to create the windswept look and attached the figure to the chandelier without using strings or wire.  Apparently the artist called in engineering help to cantilever this piece of art.  Another unusual work of art is a large metal mobile at the entrance to the restaurant.

As I was running behind on the menu, I expected to join my fellow reviewers for a coffee and dessert.  Robert Mulders, the owner of the restaurant and previous owner of Rozenhof at the bottom end of Kloof Street, and who has an uncanny resemblence to violinist Andre Rieu, immediately offered me a starter and a main course.  I was strongly recommended the cheese souffle as a starter, something I would never have chosen myself, but it was outstanding, served with a herb and mustard cream.  It costs R 70.  Other starter choices are a Chicken and roast pepper salad (R 56) and a Mixed six leaf salad (R 32).  The Suppli with pancetta and zucchini (R 55) sounded wonderful too.

Six main courses were offered, ranging from R 105 for linefish and a vegetable trio, to R160 for beef fillet served with a mustard crust, Bearnaise sauce and mushroom ragout, sounding delicious.  A second linefish dish costs R110, kingklip R125, and Moroccan lamb with couscous is R165.   I heard duck mentioned, a special at R 175.  I had read a brutal review earlier in the week about the duck (and the restaurant), and thought that I must give it a try.   Two generous pieces of duck were served in an orange sauce, with roast potato slices, as well as a large portion of diced carrots and courgette.  I loved the duck with its crispy skin, but I did not like the roast potato slices, which were too tough for my taste.   I did not have dessert, but saw them served: citron tart, chocolate nougat terrine, panna cotta with smyrna figs, an unusual sounding olive oil and muscadel cake, and date almond and white chocolate torte, ranging between R36 – R45.  They were well received by my fellow reviewers. (I heard later that Rozenhof was known for its cheese souffle and duck).

As the wines had been chosen by Dirk, I did not see the winelist.  Dirk raved about the 2002 Yonder Hill  cabernet at R65, excellent value for money.  I did not like my red wine poured into a small wine glass, but I did see larger ones on the table.  We left long after midnight, Robert generously having brought us a dessert wine, and he gave no sign at all that he wished us to please go home.

Whilst writing this blogpost I vowed to go back to try the Suppli starter and Beef fillet main course.   An opportunity presented itself two days later, after an early finish of the acclaimed play ‘London Road’ at the nearby Fugard Theatre.   The Suppli (a very filling and most unusual starter of deep fried rice and herb croquettes stuffed with mozarella, topped with crispy pancetta) and Beef Fillet were excellent.  The fillet was served a little too rare (ordered medium rare) for my liking, but the roast potato slices were much better second time around.  I was unable to finish the beef, it was such a generous portion.

As the restaurant is based within a space shared with IDASA’s book shop, it opens for breakfast at 8h30 on weekdays, served at a counter facing Church Square, at a communal “Melissa-style” table, or at an individual restaurant table.  Muffins, croissants and cooked breakfasts are served.   Parliamentarians and nearby office workers pop in for snacks throughout the day.  The “Quick Spin” 2-course lunch, served in a guaranteed 50 minutes, costing R 150, is very popular.  It is also called for as a “take-away” by well-known ministers and members of parliament. A free Wi-fi service will be offered shortly.

An interesting spin on 6 Spin Street is its themed Cookery Book menu.  Every two weeks a cookery book is an inspiration for a special menu.  Currently it is Phillippa Cheifitz’s “South Africa Eats”, and a sweet potato and squash soup, or a warm salad of grilled yellowtail, parsley, haricot beans and fresh rocket is offered at R50.  Pieter Dirk-Uys’ “Kossie Sikelele” cookery book will be the next to be featured, Tannie Evita having approved the restaurant.  Mulders is planning a ‘Show and Dinner” promotion when Dirk-Uys has a show at The Fugard theatre in September.

POSTSCRIPT : I returned to 6 Spin Street on 13 May, after a concert at the City Hall, with two friends, both artists.  They were overwhelmed by the artworks on the walls and the interior of the building in which the restaurant is located.  We shared a Citron Tart with fresh cream and fresh figs (my first taste of figs ever), and we loved its lightness, tanginess and smoothness.  It emerged that Robert Mulders is also the Chairman of the Friends of the National Gallery, and he chose the paintings on the restaurant walls.