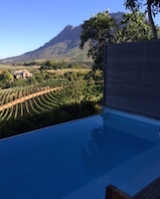 UK wine judge and writer Jancis Robinson spent most of this past week in the Cape Winelands, after a seven-year absence.  She spoke kindly about our industry, and offered insights into the UK and USA markets.  She wrote from Delaire Graff, where she had attended a Chenin Blanc tasting and stayed over: ‘South African wine is in full ferment. It deserves far more international attention than it is currently getting‘!

Unable to attend two public meetings addressed by Ms Robinson, I have looked for information about 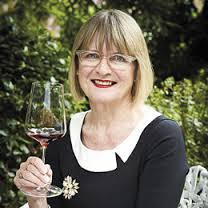 her talks, admired by some, and slated by a few.

A detailed summary about Ms Robinson’s (with her husband Nick Lander) talk at #RootstockSA, held at Alleé Bleue, was written by Judy Bouwer of wine.co.za.   Key points she summarised were:

*   SA wine estates should target UK restaurants, which have far more reasonable mark-ups.  Young British people spend their money on food and wine, not being able to afford to buy END_OF_DOCUMENT_TOKEN_TO_BE_REPLACED 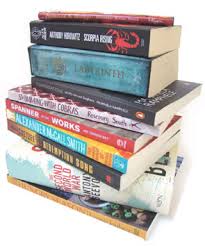 The organisers of the 7th Franschhoek Literary Festival have attracted negative attention to the 2013 event, taking place this weekend, before it has even started, with the announcement last week that no South African wine writer was good enough to win this year’s South African Wine Writers Award, sponsored by Boekenhoutskloof’s Porcupine Ridge to the value of R25000.

Organised by Franschhoek Wine Valley Tourism (FWV), the media release to announce this slap-in-the-face news to all local wine writers did not offer any further explanation. What is not known is which wine writers entered the competition and why the judges John Maytham of radio station Cape Talk and occasional wine writer himself; BBC radio producer and author Duncan Minshull, with no apparent wine writing experience or wine knowledge; and Canadian VINES editor Christopher Waters did not find any of the entries to be of a high enough standard.  The winner and first runner-up were to have been announced at Essence (hardy known for its winelist!) on Friday, as part of the Franschhoek Literary Festival.  In its fifth year of the Award, past winners are Joannne Gibson, Norman McFarlane, and Tim James (who won twice).  The Award recognises technical quality and literary quality, the Franschhoek Wine Valley said in its media release when calling for entries, having to do a reminder call, possibly due to too few or too poor quality entries received.  Oddly the media release regarding the outcome of the judging appears to have been removed from the FWV website, and has not been sent by the PR agency of FWV, Smart Communication and Events, nor by its CEO Jenny Prinsloo, nor by the publicist Claire Richards for the Franschhoek Literary Festival, when requested!  This may be due to the amusement with which wine whiner Neil Pendock has written about this state of affairs (e.g. ‘SA wine writers; From Bad to Bizarre’), the only wine writer who appears to have commented about the poor quality wine writing, as judged by the Franschhoek Literary Festival judging panel!  Pendock cheekily suggested a course in wine writing for the Literary Festival after this fiasco!

The programme for this year’s Literary Festival is disappointing in terms of the quality and stature of the Festival, given the great authors who were invited in the past. Part of the reason could be that other Book and Literary Festivals have sprung up in Cape Town and in Knysna, since the successful Literary Festival was first conceived in Franschhoek.  The organising committee too may be to blame, having become rather arrogant, as we noted last year when we provided feedback to Literary Festival Director Jenny Hobbs, which she responded to with a curt ‘noted‘, unlike previous years, when she welcomed and discussed feedback. Leaking information to her infamous daughter Jane-Anne Hobbs about a Blogging workshop proposal for the Festival we had discussed with Hobbs snr, and mocked on the now defunct Twitter abuse account by Sonia Cabano, further demonstrated the lack of ethics of the Hobbs mother and daughter. No surprise is the inclusion of Hobbs jnr on the Festival programme!   Nepotistically Hobbs snr’s brother David Walters features in the Literary Festival programme too, with a ceramics exhibition ‘Words on Pots’ at his gallery!  Noseweek editor Martin Welz has managed to organise the first ever Franschhoek Literary Festival side event, with a weekend workshop at the Protea Hotel addressed by ‘activist experts’ Richard Young on the arms deal, David Klatzow on criminal prosecutions, Shaheen Moolla on the destruction of our marine life, and Mariette Liefferink on acid mine drainage and radioactive fallout.

Going through the programme to plan my attendance, I found little to excite me on this year’s programme. Twitter has one session dedicated to the fast-growing 140 character communication form, with past speaker and Woolworths’ social media practitioner Sam Wilson (8550 followers), writer/editor Julian Rademeyer (3500 followers), and Business Report columnist Ann Crotty (6 followers and still has an ‘egg’ profile picture, demonstrating what a newbie she is at Twitter!).  Blogging still is not recognised as a writing form by the Literary Festival organisers.  Alexander McCall-Smith probably is the biggest name the Literary Festival offers, but its media sponsor the Sunday Times is offering Capetonians an opportunity to hear him speak in Cape Town later this week! Award-winning writers on the programme are Lauren Beukes, Christopher Hope, and Antjie Krog, with Jane Raphaely, Finula Dowling, Marguerite Poland, Hermann Giliomee, Tony Leon, and Melanie Verwoerd also being well-known.

Every year Christopher Duigan runs the Autumn Music Festival alongside the Franschhoek Literary Festival, and performs ‘Literary Liszt’ on Friday at 19h30, two Schubert-dedicated concerts on Saturday and on Sunday morning, and a free ‘Voices for Africa’ performance on Saturday evening, all performed in the Dutch Reformed church on the main road.

Despite the disappointing programme this year we are grateful to the organisers for putting on the event, and for most Franschhoek accommodation establishments and restaurants already being fully booked weeks ahead of this coming weekend.  Attendees of the Literary Festival do not only enjoy attending the sessions, but also like interacting with each other at guest house breakfasts, and at coffee shops and restaurants in Franschhoek.  Booking in advance is advised, as a number of sessions are sold out already.  Excellent weather is forecast for the weekend.

POSTSCRIPT 13/5: We have received the following statement, written by organisers Jenny Hobbs and Sheenagh Tyler and sent by Claire Richards, the Franschhoek Literary Festival PR consultant, to explain the lack of a 2013 South African Wine Writers Award:

‘STATEMENT ON THE WINE WRITER’S PRIZE

The FLF wishes to clarify a few points around the 2013 Wine Writer’s Prize, which was not awarded this year.

· The prize is funded by the Franschhoek Literary Festival and presented by the CEO of Franschhoek Wine Valley.

· The independent judges for 2013 were John Maytham (South Africa), Christopher Hope (a South African who lives in France) and Christopher Waters (Canada).

· 20 submissions were sent to the judges after the deadline was extended.

· In 2012 there were 23 submissions.  Several wine writers declined to submit entries this year, feeling that they had nothing suitable to offer.

· Submissions are sent to the judges anonymously.  Two in Afrikaans were judged as such by John Maytham and Christopher Hope and translated for Christopher Waters.

· No payment is involved.  The judges are thanked for their work with the offer of a case of South African wine.

· Their unanimous decision this year was that not one of the entries lived up to the expected literary and technical qualities of wine writing.

· The FLF is funded by Porcupine Ridge Wines and the Sunday Times, neither of which groups has any say in the judges’ decision, and ticket sales.

· A discussion will be held by the organisers and their advisers after the FLF about the parameters for the prize in future years.

POSTSCRIPT 17/5: There appears to be confusion between the sponsor Porcupine Ridge and the Literary Festival organisers about the hashtag for the Festival.  It has been confirmed that it is #FLF13. 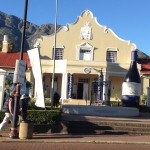 Porcupine Ridge appears to have printed all its marketing material for the Festival as #FLF2013!  A much larger problem to befall the Festival is that one of its lead speakers Anthony Horowitz has withdrawn from the Festival in the very last minute!  Franschhoek felt very commercialised today, with a massive bottle of Porcupine Ridge and many Sunday Times banners outside the town hall, the marketing effort of its two sponsors!

POSTSCRIPT 17/5: Sadly the Christopher Duigan ‘Literary Liszt’ concert in the Dutch Reformed Church this evening clashed with a wannabee Cat Stevens singing outside the church at the Night Market!

POSTSCRIPT 18/5: The Franschhoek Literary Festival is in further trouble – a documentary ‘Truth be told’, which Noseweek was to flight in a fringe event to the Festival this weekend, was stopped after the SABC lawyers served papers on its producer Sylvia Vollenhoven, who was to speak about her battle to get the documentary flighted.  Earlier this year Vollenhoven flighted the documentary to a number of Noseweek reader groups in the dungeons of the Baxter!

POSTSCRIPT 19/5: Wine writer and PRO Emile Joubert has written an Open Letter to the organisers of the Wine Writers’ Award!