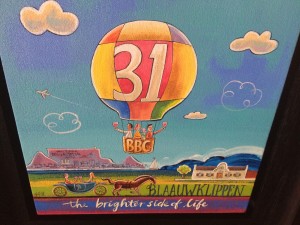 Friday’s 31st Blaauwklippen Blending Competition event was not only a celebration of the enthusiasm and skills of wine clubs around the country, but also of the rejuvenation of Blaauwklippen, with a number of changes made with a new Tasting Room venue, the addition of a new Bistro with a new champion for it, a new Spirits Room, and a redecorated entrance and cellar function room.   The Blending Competition made history with its most unusual outcome.

We were welcomed on a perfect function weather day on the lawn between the Tasting Room and the Manor House and Jonkershuis, a space I had never seen before. We were served Blaauwklippen’s Ons Sprankel wine, and canapés made by new Blaauwklippen Bistro owner and charcutier Steve Jeffery.  They were served by dapper looking waitresses, wearing Bistro black outfits and cheeky hats, looking smarter than most restaurant staff I have seen 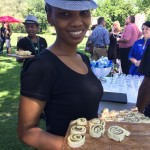 in a long time.  They offered platters of spinach and feta phyllo pastry parcels, and mozzarella pesto roulades, which doubled up as the starters (I did not see the third canapé specified on the menu).  Natalie Campbell told me that the Manor House is used for conferences and weddings, while the Jonkershuis is used for staff accommodation.

I had a chance to chat to Steve before we sat down, and he told me that he has been at the Old Biscuit Mill for the past nine years, selling his charcuterie products, having had a stand at Blaauwklippen’s Market at one stage too.  Rolf and Steve had been talking for about two years about doing something jointly, and 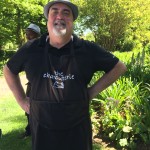 Steve is happy with the deal, and about being able to cure his meats on the farm.  Both business partners share similar philosophies, believing in sustainability and terroir, and he feels part of the Blaauwklippen ‘family’. He sources all his acorn-fed steroid-free pork from Oak Valley, and uses Kalahari Oryx salt in the curing of his meat products.  He says he is an ‘old-fashioned man‘, making gelatine by cooking bones, for example.  Similarly the wine farm recycles everything it can.  He described his Bistro offering as platter-based, a Banting one generating about one third of their sales!   All food requirements at Blaauwklippen are now the responsibility of Steve and his team, which have charcuterie as their core element.  He refuses to sell carbonated drinks in the Bistro, and offers lemonade and other cordials made from farm produce instead.  A Deli selling his charcuterie and other produce is planned, but they have been so busy since opening on 1 October that there is not enough produce available to sell in the Deli yet.

We walked through the old barrel cellar to the Cellar function room, which has seen a make-over, with table bottoms made from recycled barrels, and new classic black moulded plastic chairs added.  It was clear that Blaauwklippen has a new blue corporate colour, which was reflected in the shirts worn by the Tasting Room staff, in table runners, and in serviettes, and was picked up in beautiful flower arrangements, which included blue Iris.

We were welcomed by Rolf Zeitvogel, Blaauwklippen MD and Cellar Master, and apologies were made for the absence of owner Mrs Schörghuber, an illness having prevented her from traveling.   She was represented by Board director Christian Kohler, who had also attended a Board meeting the day before. Rolf explained that the theme for this year’s Blaauwklippen’s Blending Competition was ‘The Lighter side of life’, which artist Frans Groenewald captured in a quirky label for the winning blend, and the flower arrangements picked up the colour spectrum in the design.

The Blaauwklippen Bistro staff served the main course, which was a Ploughman’s Platter consisting of a mix of tiny bites to reflect 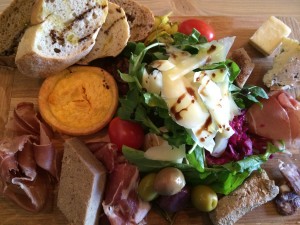 Chef Steve’s charcuterie skills and products.  Included on the platter were elements going beyond the definition of a Ploughman’s Platter of cheese (Brie, Gorgonzola, and Parmesan), chutney (there was none), and bread. Slices of prosciutto, coppa, bresaola, lonzo, salami, and saucisson, as well as rocket, a beetroot salad, a mini-quiche, pickled zucchini, olives, and three (undescribed) paté tasters were also on the platter.

Seven wine club finalist teams of two representatives each attended the function, having been announced as finalists out of 99 entries received, which included four international entries too.  Rolf said that receiving international entries raised the level of the blending competition, and confirmed its popularity. The challenge this year was to make an easy drinking red wine with a sweeter profile, difficult to make, Rolf said.  The judges evaluating the blends were Cape Wine Master Clive Torr, wine tour guide Karen Glanfield, Albert Basson (Blaauwklippen winemaker), Samarie Smith of Media24, and Elona Hesseling of WineLand magazine.   The challenge set for the wine clubs was to ‘create a consumer friendly, every day, easy-drinking, juicy, modern red blend, consisting of the following wines, Cabernet Franc 2012, Malbec 2013, Shiraz 2013 and Zinfandel 2013. A minimum of three of the four base wines had to be used in the final blend, and Zinfandel and Cabernet Franc had to be included in restricted quantities in the recipe’.   Albert made us laugh when he said that the wine clubs were tasked to create a ‘drinking wine, and not a thinking wine‘!

The finalist wine clubs were the following:

*   Wine 101 from Pretoria:  there are only six members, being colleagues and friends, and they enjoy trying new things.  It is the third time that they have entered.

*   Baronne Wynklub from Pretoria: they have 12 members who meet monthly.

*   Vaal Ja-Pe Wyngroep from Pretoria: nine families are members, and they meet at each other’s houses. Entering the Blaauwklippen Blending Competition is an annual highlight for the wine club.

*   Oude Molen Wynkring from Potchefstroom: started by four lecturers at Potchefstroom University, and has 20 members. Each couple makes its blend, and the samples are blind-tasted.  The winning blend is the one entered on behalf of the club.  This wine club has entered every one of the 31 Blending Competitions!

*   Weskus Wyngilde from Vredenburg: the wine club started as a mens-only club in 1995, but now has women members too. They first entered in 1997, and have entered 17 times to date.

*   Sippers from Centurion: they have been six members since 2002, and are proud that they can make a contribution, even if based in Pretoria.  They have entered the Blending Competition six times, and made the finals for the first time this year.

*   Bonza Bay Winos from East London:  it was their first entry, and they were surprised yet delighted to make the Finals.

In announcing the winners, Rolf handed the Newcomers Trophy to the Bonza Bay Winos.  He asked the remaining six wine club representatives to stand, and then asked that the clubs which did not have Zinfandel as 30% of their blend to sit down.  No one did. H 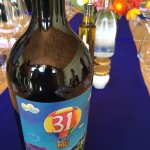 e then asked those that did not have 35% Shiraz in their blend to sit down.  No one did.  He did the same with 15% Cabernet Franc, and no one sat down, leaving 20% of the blend being Malbec.  Rolf then announced that for the first time in the history of the Blending Competition six wine clubs had created exactly the same blending proportion, and all six the wine clubs became joint winners. 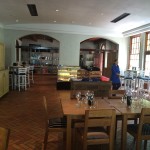 In mistakenly thinking that the dessert had been laid out in the old Restaurant, I wandered to the newly created Tasting Room, a very spacious open plan area with tasting tables, a wine sales counter, a shop area, a fridge selling chocolates by Jane Stuart, and even a glass-wall Studio in which Artist-in-Residence Marius Prinsloo can be observed painting.  I was very impressed with the changes made to the entrance hall of the building, and almost everything standing there previously, including 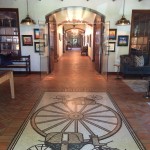 the wagon, has been removed.  For the first time I noticed the Blaauwklippen logo on the floor.  The newly-created Spirits Room impressed too, a spacious area to display the spirits produced by Blaauwklippen, and a potstill brandy ‘hub‘ is to be established.  The old copper distillery equipment is displayed in the fireplace, and the deep blue wing back chairs are an attractive addition. 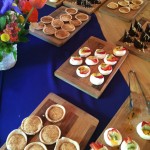 I found the dessert at the end of the room we were eating in, and it was a disappointing selection of hotel-like milk tarts (the berry coulis described on the menu missing); meringue baskets filled with fresh fruit and Chantilly cream; and dark and white chocolate brownies.  Coffees were brought on trays without special orders or style requests taken.  It was good to see that Terbedore coffee is served.

Rolf commented on the history of the Blaauwklippen Blending Competition, the only one of its kind in South Africa:  ‘We have cemented a reputation of professional, but hands-on approach to wine selection. This competition, the only wine contest in South Africa where amateur wine clubs are given the opportunity to submit their own blends for judging by a panel of professional wine experts, gives those who enter a real look into what happens on a working wine farm when creating a winning blend of commercial value’.

Rolf made sure that I received a copy of the Bistro menu, which offers a choice of Cheese and Paté, Charcuterie and Cheese, Banting, and Vegetarian platters, at R100 each per person, and the trio of desserts (with a Banting alternative of a Tiramisu) at R40.  Wine and chocolate pairings cost R80; canapés cost R17.50; and picnic platters cost R200 for two.  A dinner menu is more substantial, and includes cooked dishes such as sirloin, Duck a l’Orange, and Eisbein.  The photocopied Bistro menus do not do justice to the upgrades made at Blaauwklippen.

It was a lovely relaxed function, and six wine clubs returned to their homes very happy at the good fortune of having won.  Rolf and 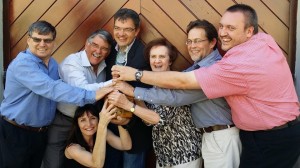 winemaker Adrian will visit each club in the next twelve months.  The winning blend will be sold in 1,5 liter bottles from the Tasting Centre.  The meal was a disappointment in not matching the standard of past Blending Competition events, and proved to be more of a showcase for charcuterie than for the culinary skills of Steve’s team, which he told me includes a Chef. The menu contained typing errors too.  We missed the bubbly presence of PR Consultant Nicolette Waterford, who was cooped up with chicken pox. All in all, the changes made at Blaauwklippen are a huge improvement.  The Blaauwklippen Bistro platters may be ideal for wine tasters and visitors, but the food it offers for functions may have to be made more substantial than what we experienced on Friday.

Disclosure:   We received a 1,5 litre bottle of the award-winning 2013 Blaauwklippen Barouche Blend, as well as a piece of sausage made by Steve Jeffrey, containing the Barouche wine.