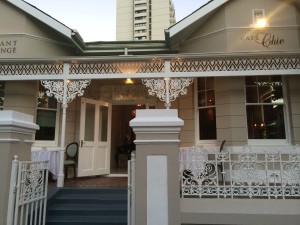 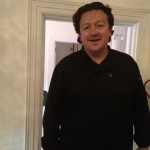 Chef Conrad had opened Geisha in 2007 in the building alongside Newport Deli in Mouille Point, spending R3,5 million on its interior, when he received an eviction order, being informed that the building was to be demolished, to make way for a new building.  He moved to the Cape Royale Luxury Hotel, opening Geisha Wok & Noodle Bar, now out-of-pocket due to the additional decor costs.  At the same time he had been appointed as a consultant to bring feet to The Rockwell ground floor, anchor tenants being Bouillabaisse and Crepe Suzette, owned by Camil and Ingrid Haas.  Surrounding them were to be organic shops, selling breads, wines, ice creams, meats, and other foods.  The project collapsed, and the deposits for these businesses appear to have been held by Gallagher, who left Cape Town in 2009, with unpaid bills for his restaurant, and unpaid staff. He was declared bankrupt by two suppliers in Cape Town.  He returned to Dublin, his home base, where he opened three restaurants, two of them owned by a company of which Chef Conrad was a director, contrary to Irish law. He has owned Peacock Alley and Lloyds, each a one Michelin-star restaurant. He then opened PoshBurger Bistro in Las Vegas, closing it after three months when he could not get a liquor license! Disturbing is to note that the restaurant Facebook posts claim him to be a Michelin chef, when he no longer owns a Michelin star restaurant! 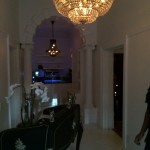 Why Chef Conrad has returned to Cape Town after such a tumultuous past in Cape Town is unclear.  Suppliers appear to have been paid, but the situation on staff wages is uncertain.  He has a South African wife Candice Coetzee, once a Miss Port Elizabeth finalist, who greets arriving guests.  They met when Chef Conrad consulted to Sun International.  Was it a lifestyle change, allowing him to enjoy more time with his wife and children, and to drive the children to school?  He now defines ‘success’ as having time off with his family, and having complete control over the food prepared in his restaurant.  Was it because he has client consulting projects (including the Kove 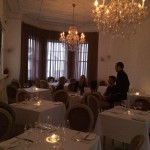 Collection, and the Table Bay hotel), which he attends to with his Manager David Tullpan during the daytime, and then is hands-on in the kitchen in his restaurant on Mondays to Saturday evenings, only opening for lunch on Fridays.   He advertises pop-up chef’ courses in New York, Chicago, and Boston, in shared kitchens.

I was invited by his PR company Celebrity Services Africa to try the restaurant in December, and accepted, to meet this controversial chef. He was absolutely charming, meeting me in the bar, and instructing David to pour a glass of Moët et Chandon, rather than a local sparkling wine, unfortunately poured into a glass with a small chip.  He told me that he has a small kitchen team in a small kitchen space, wanting to develop local kitchen staff, which will discipline him to be at the restaurant all the time, he said.

He is well-connected with the Irish clique in Cape Town, having been brought to Cape Town by Cormac Keane, who owned Portofino (in the previous Showroom restaurant space, which had earned the late Chef Bruce Robertson an Eat Out Top 10 Restaurant accolade).  He name-dropped Chef Liam Tomlin of Chef’s Warehouse & Canteen, and clearly was close to controversial Cape Royale Luxury Hotel owner Pascal Phelan. Oddly he did not seem to know Clare and Eamon McLoughlin, notorious Irish Spill PR company owners!  Dave came to chat regularly where I sat on my own in the Boutique room, allowing the lights to be turned up for the photographs. David was previously at Bungalow, Constantia Glen, Harbour House, The Ambassador hotel, and Crystal Towers.

The restaurant still has separate rooms, the main restaurant section for the a la carte menu, and the Boutique room for the Tasting Menu, which costs R610/R910 for seven courses without/with wines, and R800/R1100 for 9 courses. There is a tiny room for two behind the bar room. It was quiet on the week night when I ate there, but Chef Conrad said that business was picking up.  Great is parking on the property in the evenings, shared with a neighbouring design company, as well as across the road behind the FNB building. 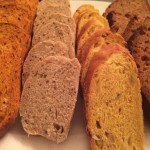 The bread plate impressed, with warm freshly baked Guinness bread, curry and apricot bread, rye and caraway bread (my favourite, a childhood memory), and tomato and basil bread. Chef Conrad decided which dishes to send out on his ‘surprise menu‘. The pea and mint cappuccino 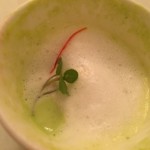 with poached lobster amuse bouche was a highlight, perfectly balanced, and not over-salted.  This was followed by a Knysna oyster served with a pickled pea and pickled ginger, served with a soy sauce reduction, set on red pepper corns. 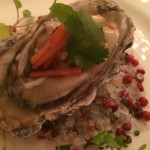 Course number three was a creamy buttery shiitake risotto served with melt-in-your-mouth scallops imported from Ireland, a slightly more salty dish, but within an acceptable salt limit.  For the fish course a fish knife was brought to the 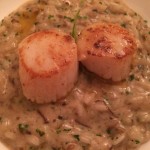 table.  Seared tuna was placed on top of green peas and rosti, to which was added a butter beurre blanc sauce, topped with sweet peas.  The crispy rosti texture matched that of the tuna. 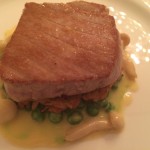 Next up was confit duck leg as well as pan-seared duck, served with an unusual grated green apple and butternut purée, a foie gras and walnut lollipop, topped with a sunnyside-up quail egg.  I did not like the taste of the walnut in the lollipop, spoiling the foie gras taste.  On seeing that Chef Conrad serves foie 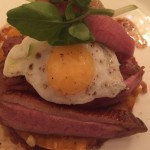 gras, Grass Consumer Action Group (which regularly lambastes Woolworths for its misleading packaging claims about its dairy, egg, and meat products) entered into a debate with Chef Conrad, which led him to remove the dish from his menu immediately, winning him brownie points. 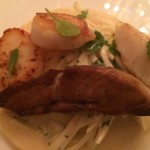 Course 6 was seared scallops served with remoulade, celeriac purée, and foie gras, a delicious treat.  When I tried the Swiss-style raclette cheese with green fig preserve, Chef Conrad came to sit down.  He told me that his staff is salaried, 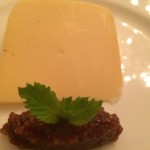 not working for tips.  He told me that he sources many of his ingredients from Wild Peacock, and meats from Ryan Booth.  For him protein is the king of the plate (we must have been talking about Banting then, when he told me that he lost a lot of weight on the eating plan!).  The final course was a 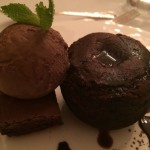 David is the sommelier, and suggests the pairings for each of the courses.  The winelist is ‘Proudly South African‘.  No vintage information is provided.  Graham Beck Brut (R80/R300) and Brut Rosé (R90/R350) are the only two local sparkling wines on the winelist.  Ten of 18 white wines are offered by the glass, and the offering is dominated by Chardonnay and Sauvignon Blanc.  Only four of 21 red wines are available by the glass, and the prices range from R58/R220 for Warwick The First Lady Cabernet Sauvignon, to R1500 for Waterford Estates The Gem. Vin de Constance costs R850.

Irritating, and a PR no-no, was a call about two weeks ago, from the PR executive, who tried to find out if, and when, I would write about my visit to the restaurant. I could not help but think that this was client Chef Conrad pushing his PR agency. I was grappling with the ethics of having accepted the invitation, and writing about Chef Conrad’s past in Cape Town.  We have tried to declare what we know about this background, to provide a balanced background.  We have not heard anything controversial since Chef Conrad’s return to Cape Town, keeping a low profile, but he Tweets and Facebooks regularly, unfortunately rarely with photographs of his dishes.   Interesting is that they encourage one to have an early pre-theatre dinner, available from 16h30.  Chef Conrad now offers cooking classes on Saturday mornings.

The food by Chef Conrad is excellent, and the service by David very attentive.  Chef Conrad’s past is baggage that will haunt him for many years to come!