I had heard that Craft had opened in the space from which Apprentice operated for a number of years earlier this year, having been a ‘test kitchen’ for the students of Letetia Prinsloo’s Institute of Culinary Arts.  An unfortunate association with Le Chocolatier owner Daniel Waldis led to the closure of the restaurant. In its place is a dual restaurant and bar, separated only by a bar counter, but the difference in attitude of the two managers is massive.   The two Crafts are owned by Francois Jooste, who also owns Java and Apres Bistro, all close to each other in a tourist rich area of Stellenbosch.

I visited on Monday, entering on the left, at Craft Wheat & Hops, which I did not immediately associate with a bar specialising in beers.   Once one 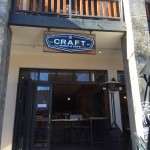 enters, it is very clear what it serves, with 16 beers on tap offered, and a similar number of beers displayed on shelves.  I recognised the voice of the friendly lady behind the counter, and she reminded me that she was the Chef and Manager of The Stall in Franschhoek when it first opened eighteen months ago.  Marilie van Niekerk left when she had her baby.  She made a menu available for me immediately, without having to ask for it, it being such a pleasure to experience her excellent service.  The bar had not yet been set up, tables having been placed on top of each other, as the bar only opens at 15h00 on week days.  Interestingly Craft Wheat & Hops offers food as well, but with only two options. Flammkuchen is prepared in what look like a massive pizza oven inside the bar, seven options offered in a price range from R40 (for Caprese) to R52 (smoked salmon, red onion, rocket, and caviar).  An extensive list of Tapas dishes is offered, ranging from R29 (crumbed mozzarella sticks with berry compote) to R45 (roast chicken and cheddar quesadilla served with homemade salsa, guacemole and cream cheese).   Other tapas include lamb meat balls, ‘corn dogs‘,  chorizo and mozzarella crostini, mini mushroom burgers, and ‘beer brats wrapped in bacon‘. 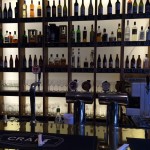 At Craft Bakery the interior is more impressive, with wood cladding throughout, and the bar stool tops look like they have been 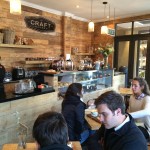 carved out of a piece of wood.  The table tops are wooden, while the chairs are bistro style in black metal.   The restaurant space is only half as big as the bar side due to the baking taking place behind the restaurant 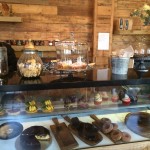 space, probably using the original Apprentice kitchen space.  Display cabinets show off their quiches, muffins, croissants, bagels, scones, chocolate Lindt brownies, tartlets, cup cakes, cakes, choc chip cookies. biscotti, cinnabons, and cinnamon doughnuts, ranging in price between R2 and R25.  What is not clear is that one has to go right to the end of the counter in the crowded restaurant space to place the order, the small blackboard on my table having been rubbed out and written over, making it impossible to read that it meant to inform that one has to go to the counter.  The menu is attached to a wooden clipboard, and lists a number of items one can have on one’s sandwich 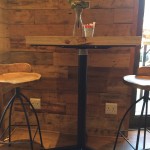 , including two slices of rye (R10), cold meats, and cheeses, each individually priced, with a salad of lettuce and tomato on the side promised.   A waitress came to my table, and I ordered a sandwich with Brie (R15) and black forest ham (R15), expecting it to arrive on the side so that one can make one’s own sandwich, as Schoon de Companje down the road on Church Street does.  The sandwich arrived with a ham which was not Black Forest, and the sandwich was pre-made and toasted.  The Manageress Landi came to show me her supplier’s version of ‘Black Forest‘.  When I asked her where the salad was, she said most patrons don’t 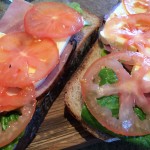 want it, so they just leave it out, but I wasn’t asked!   She offered to have a new one made, not toasting it, and putting the lettuce and the tomato on the sandwich.  The cappuccino came in a non-hot Bodum glass, which never makes a cappuccino look good, and is misleading as the liquid is hot but doesn’t feel so when one holds the glass.  Once the sandwich had been brought to the table, there was no further service, no one checking if everything was to my satisfaction, or bringing more water, or asking if I’d like a second coffee.  The service was slow, in bringing the sandwich to the table, and then took even longer for sandwich number 2.  What was impressive was the design of the take-away box for my cupcake (R15), which looked as if it was made from wood.

I went to ask Landi some more questions at the desk, but she was deep in conversation with what turned out to be her sister.  She seemed disinterested in answering questions about the restaurant, not knowing much about her colleagues, when I asked her about her bakers. She only knew the name of the main baker Anton, who previously was at Woolworths, the sum total of what she could tell me.  There are no business cards, so she wrote the opening times and contact details on a till slip for me.  They do not have a website either, giving the operation a very amateurish feel.  Landi became cheeky when I addressed the poor service with her, saying that it is a self-service restaurant, and therefore they do not need to check the service satisfaction of their customers!

Craft is chalk and cheese in the two managers’ handling of customers – one is passionate and the other doesn’t care!

POSTSCRIPT 10/7:  The cupcake I bought to take away was squashed when I opened the container, the cupcake being higher than the box lid!