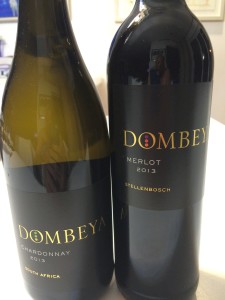 Grant Dodd, Australia-based partner and CEO of Haskell Vineyards in Stellenbosch, hosted a #DombeyaDay on Thursday, a vertical tasting of five vintages each of their Dombeya Chardonnay and Shiraz, proving that their inexpensive wines can be cellared.

Haskell Vineyards belongs to Preston Haskell, who bought Dombeya, which makes wines under the Dombeya and Haskell labels, its winemaker being the highly regarded Rainie Strydom, who celebrates her tenth year with the wine farm this year. The farm was named after the Dombeya pear tree which grows on the farm, and originally produced angora wool.

Dodd related the conversation between Haskell and himself ten years ago, when Haskell bought the farm, about the Dombeya brand name.  Dodd suggested its 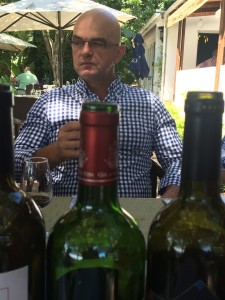 demise, but Preston refused.  Dodd said: ‘Ten years on, a retrospective summation of this conversation would conclude that the majority shareholder made the right call. Dombeya continues to pay its way in the wine world, growing out of an uncertain genesis to distribution in 12 countries‘.  He related that the brand has been listed in some of the best restaurants around the world, was drunk at the wedding of Prince Albert and Princess Charlène of Monaco,  and has received support from wine critics and judges.  The Dombeya label has been upgraded over the past ten years, sheep and trees on the labels having made way for classy labels, reflecting the wine estate’s commitment to quality.

The media guests were taken through a five year vertical tasting of Dombeya Chardonnay and Shiraz, both selling for under R100 a bottle.  The tasting highlighted that Dombeya wines have the ability to age, even though ‘we don’t pump Dombeya as a cellaring proposition’, Dodd explained.  He added: ‘Our goal is to ensure that the quality inherent in these wines remains a feature that the brand is respected for going forward’.  I could only join the event for lunch, an extremely busy guest house week and dreadful traffic preventing me from getting there earlier. 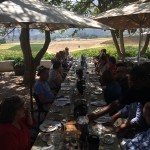 The media guests were seated at one long table, at the wine estate restaurant The Long Table, operated by Chef Corli Els, which opened in 2010.  It was a big hit at the time, and our review then highlighted the excellent food and beautiful plating but underwhelming service.   It was a great shame to see how the quality of the cuisine has deteriorated over the past five years, while the food service remains poor.  I had taken the seat of another guest, with already-used glasses on the table, so asked for a clean glass for water.  The waiter asked me why I could not use the other person’s already-used glass!  At the neighbouring table the very well-known future forecaster (High Road/Low Road) Clem Sunter was having lunch.

The starter was described on the menu as ‘Tomato Gazpacho shots with mango and cucumber‘, but it was nothing 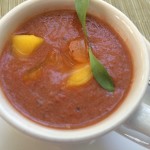 more than an unexciting gazpacho served in a cup.  A number of us had been invited to Jordan Wines the day before, and coincidentally had been served a far more tasty tomato gazpacho with a bread stick there, prepared by The Bakery at Jordan.  Weird was the intermediate dish described as shrimp and cucumber rolls with sesame vinaigrette and 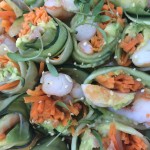 coriander oil.   It looked like a novice’s attempt at sushi, the untidy rolls falling apart when placed on one’s plate, with carrot sticks and avocado too, and very little of the shrimps to be seen or tasted!

The main course we were served was a selection of salads, which led one of the male guests close by to comment that the food made him think of the ‘Noordhoek lentil brigade’, clearly 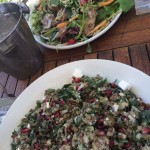 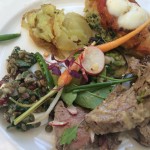 chicken rolls; very tasty rosemary sweet potato stackers, the highlight of the meal for me; a brown lentil, Swiss chard and pomegranate salad with a ginger-mint vinaigrette; and steamed eggplant with sesame dressing.

The dessert was a tiny slice of blueberry, lemon, poppy seed and almond cake, for which a fig was served almost as an after-thought after the cake had been served! 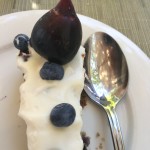 Once again, coincidentally we were served a lemon poppy seed dessert at Jordan Wines the day before.

Dodd showed me the large new charcoal drawing by Greg Lourens, which looks like a photograph, in the tasting area.

Having last been at Long Table and Haskell Vineyards about four years ago, it was disappointing that the bathrooms are still dreadful, and that nothing about the restaurant and tasting room building has been improved or modernised, given the financial resources of Haskell, and the international stature of the Haskell brand.

Disclosure:  We received a bottle of Dombeya Chardonnay 2013 and Merlot 2013, as well as a Valentine’s Day-inspired box of The House of Chocolates chocolates made with Merlot and Shiraz, with our media pack.