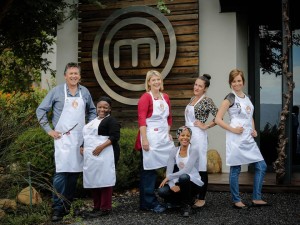 For the second time in a few weeks episode 14 started more than 10 minutes late, without warning or apology by M-Net, not even on Social Media.   We saw the Top 6 Finalists arrive at five hundred, and they were seated at the Chef’s Table.  A screen 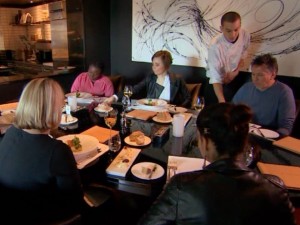 opened to the kitchen, and Chef David welcomed the Finalists, saying that they would be served a 6-course lunch to congratulate them on getting so far in the competition.  The dishes presented would be those that have been the highlight of the five hundred menu in the past 18 months.  He mentioned their rooftop garden, which was planted in the same time period.  Chef David also said that they do things differently at five hundred, the chefs serving the diners.

Nederburg wines were to be paired with each course, but we only saw the sommelier pair the first course of pressed prawns with broccoli coral, mayonnaise, and nori soil, with Nederburg The Anchorman Chenin Blanc.  The second course was salmon trout and orange caviar.  The third course served was chicken breast with chicken liver parfait, quince, and a watercress emulsion.  Course number four was beef fillet.  Course number 5 was a rhubarb and apple dessert, consisting of Granny Smith sorbet, rhubarb cloud, and a pistachio crumble.  The last course was a second dessert, with chocolate ginger and honey, salted caramel, chocolate tubes, and smoked honey.  Roxi Wardman said the meal had been inspiring, while Philippa Robinson said it was ‘the culinary highlight‘ of her MasterChef SA journey. 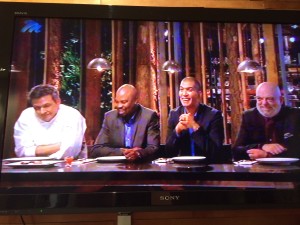 Back at the MasterChef SA kitchen at Nederburg in Paarl, the six finalists saw a black apron and six cloches.  Then Chef David of five hundred was re-introduced to the Finalists.   Chef David explained that under each cloche was a different dish of the six that he and his team had prepared for them the day before, placed randomly under the cloches, and each finalist had to choose one. They had to remember the taste of the dish allocated to them from the previous day, not having a chance to taste them again.

Abigail made the caramel salmon trout and orange caviar dish, and sounded very calm when she spoke to the camera throughout the preparation process.  She spent a lot of time creating orange pearls by reducing orange juice, but they did not float as they should have.  Focusing so much on the plating elements, she neglected the preparation of the salmon.  The sugar gloss she needed for the dish went up in smoke in the oven, which meant that Abigail had to present her dish to the judges without the orange pearls and the sugar gloss.  Chef David was outright in his feedback, saying that the salmon trout was overcooked, Chef Reuben Riffel adding that the caramel was missing on top of the salmon.  One already sensed that Abigail’s dish was in danger of being named the worst, so many parts of it being incorrect relative to Chef David’s original dish.

Philippa made the chicken and quince dish with paté, with a four page recipe.  We did not see much of her preparation, but half an hour before finishing the dish, she realised that she had missed out on of the four pages, and still had to prepare granola and 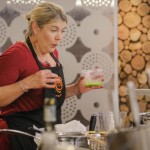 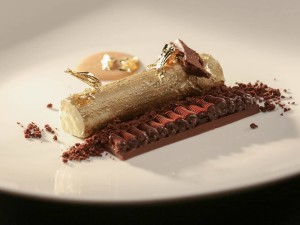 Sipho Mdlankomo was shocked when she was allocated the Chocolate dessert and jelly dish, desserts not being her strength.  She said to herself that she must focus, starting with the Italian meringue.  Despite having been allocated the most complicated dish, Chef David said that she could do it if she followed the recipe.  Chef Pete said that she was ‘on fire‘, and Sipho replied that everything was going ‘according to plan‘. At one stage she lost confidence, and started crying.  Chef David gave her advice, especially when one element was frozen when she plated it, saying that it would soften when on her plate. Chef David evaluated her dish as one made by a ‘champion’, the dish looking good and tasting exceptional. Chef Pete added that she was the best cook on the floor, and Chef Benny Masekwameng added that ‘one can see how good you are‘.  She was told that her dessert was the best dish of the day, the second dish receiving this accolade from the judges.

Roxi was allocated the rhubarb, jelly, chocolate mousse, and Granny Smith apple sorbet, happy to have been allocated a dessert, at which she is better.  She felt under pressure, because she is so good at desserts, she said.  She felt that she was running behind on time, and that she should do her rhubarb jelly first, to get it to set.  She had to redo her rhubarb cloud, it not being as pink as Chef David’s had been.  She made it again, adding some pomegranate juice for colour.  She could not get the jelly out of the tray nor cut the shape out of it to replicate Chef David’s dish.  In presenting her dish she said that she did not think that she had done justice to Chef David’s dish.  Chef David criticised her plating, saying that he would never dream of serving the dish as Roxi had, but said that she had ‘nailed the flavours‘, especially that of the apple sorbet.  Chef Pete added that the dish was very different in look to that seen at five hundred.  Chef Reuben said that she had messed up the plating, but Chef Benny found the dessert to be refreshing and light.

Mel Sutherland made the Pressed Prawn dish.  The judges commented immediately that she knew what she was doing.  She cured 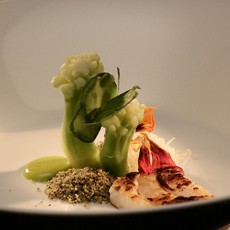 the prawns in salt and sugar, and pressed them, despite the recipe not mentioning this, but Mel remembered that Chef David’s prawns were pressed and had commented about this at five hundred, in how it added to the taste. She said that her arm was shaking from nerves when she plated.  Chef David praised her pressed prawn dish,  and praised her common sense in following her instinct.  She was praised for doing ‘a good job’, which made her start crying.   Chef Pete said that the dish had beautiful balance, Chef Benny said that she had come across as being calm while preparing the dish, and Chef Reuben said it was ‘fantastic‘.

Ian Young was given the option of relinquishing his Immunity Pin, rather than cook the Beef 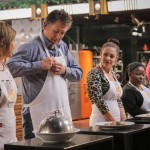 Fillet dish, and he chose to accept Chef Pete’s advice by not participating.  He was allowed to watch the other five finalists from the mezzanine level, and he made comments as they cooked over 1 hour and 45 minutes.  He felt sad that one of the finalist would have to leave the MasterChef SA kitchen. 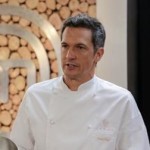 Chef David was thanked by the other judges for hosting the finalists at five hundred, and for coming down to Paarl, and for pushing the capabilities of the finalists ‘a little bit higher’.  He said that all six the dishes had been challenging, that the finalists had learnt a lot in the 24 hour period, and that all had done well.  Chef Reuben said that in a way they had compared 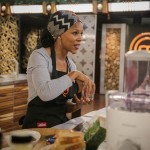 ‘apples and oranges‘, as each finalist had to make a different dish.   Abigail was announced as having the weakest dish, and had to leave MasterChef SA.

It is interesting how confident two of the Finalists have been in claiming to win MasterChef SA – last week it was Roxi, and last night it was Sipho, coming across as arrogant and as bragging.  While Sipho certainly has the public vote based on Tweets, one sensed that Mel had done a better job than all the other finalists in her Pressed Prawn dish, Sipho’s plating not looking good.   One hopes that we don’t see an engineered MasterChef SA Season 3 winner again, as we have seen in Season 1 and especially in Season 2.  Roxi is sure to be eliminated soon, losing confidence.  On Twitter last night the last two finalists were predicted to be Sipho and Ian.

For an overview of MasterChef Season 3 read here, and read here too. For a summary of episode 1 of Season 3 at Bootcamp 1 read here, and of episode 2 read here.  The summary of episode 3 can be read here.  Read about Roxi’s trip to Dublin and Thornton’s Restaurant, and the first Pressure Test in episode 4 here.   Read about the Carrot Dessert Invention Test in episode 5 here.  The Pressure Test with Swedish Chef Niklas Ekstedt, and visit to Syddah Essop in the Karoo in episode 6 is here.  For a summary of episode 7, a Team Challenge in Durban, click here.  For the write-up of the episode 8′s Pressure Test between Roxi and Refilwe, and the visit to the Ixopo Retreat by the winning Red Team, click here.  Episode 9 was a Chicken MasterPiece Invention Test.  Episode 10 was a paired Team Challenge.  In episode 11 Ian Young won an Immunity Pin, and Francois Zietsman was sent home.  In episode 12 the Finalists visited Mauritius, and Sipho won the dish of the day.  In episode 13 Penny Fitchet was sent home, after an Elimination Test against Roxy Wardman.