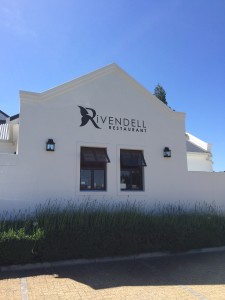 Jardine at Jordan Manager and former Sinn employee Riaan Moll told me recently that Chef Thomas Sinn, once an Eat Out Top Restaurant Chef, has closed down all his restaurant interests in Cape Town, and has opened Rivendell Restaurant on the road to Hermanus, near the turn-off to Kleinmond and Arabella.  On our way back from a trip to Hermanus my colleague and I found an oasis of 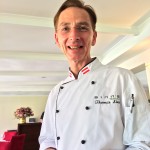 food, in the middle of nowhere, offering a whale of a good value.

Rivendell is referred to in J.R.R. Tolkien’s books, ‘Lord of the Rings’ amongst others, and means ‘deeply cloven valley‘, referring to the Bot River valley lying between two mountains.  The wine estate Rivendell is owned by Austrian couple Heimo and Maria Talhammer, and they invited Chef Thomas to open the restaurant on their farm three months ago.  The restaurant building is set back on the estate, and is not visible from the road to Hermanus.  It was previously the tasting and functions venue, but the 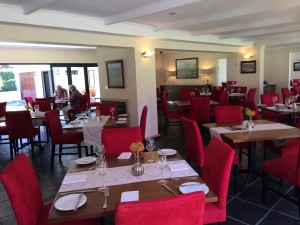 wine tasting is now done in what was previously the Bistro closer to the entrance.  The exterior of the restaurant building does not provide any indication of what one is about to experience when one steps into the restaurant The lavender growing outside the building plays an important role for Chef Thomas’ plating.

The interior is dominated by the comfortable red upholstered chairs, feeling very Austrian, and was inherited from the former tasting room.  Most tables have a beige runner (but ours did not), on which a silver vase with a pincushion is placed.  There are material serviettes, and Fortis Hotelware cutlery, and tiny salt and pepper shakers.   Garden tables and chairs encourage one to sit outside when the wind is not blowing, and the children of the patrons enjoyed the lawn outside, as well as the children’s menu offered.

Chef Thomas moved to Cape Town from Austria almost thirty years ago, opening Buitenverwachting restaurant, and then opening his own restaurant The Blue Danube on New Church Street, an Eat Out Top 10 restaurant. From there he moved to Gardens, opening opposite Dunkley Square, and then to Wembley Square (Sinn’s Restaurant), and then to an unfortunate tiny outlet on Long Street.   His Restaurant Manager Christopher Hakime has mainly worked in Hermanus restaurants, including Fisherman’s Cottage (for nine years), Tapas, La Vierge, and at The Restaurant at Newton Johnson, before moving to Rivendell Restaurant.  Our waitress was confident,and willing to assist, but was not knowledgeable about all the dishes.  She told us that the ‘Soup de Jour’ was Butternut (R49), and the daily special was kingklip and salad, at R85. 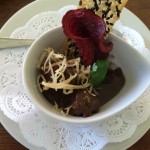 Warm rolls arrived at the table, followed by a surprise Amuse Bouche of springbok pie and deep fried puff pastry with deep-fried 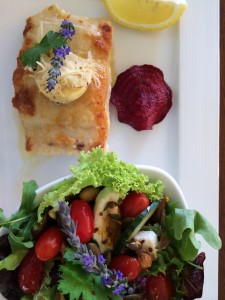 beetroot.  I found it hard to identify the content of the dish relative to the description by the waitress.  I chose the kingklip special (R85), which was served with a garden salad with walnuts, cherry tomatoes, feta, cucumber, olives, and hard boiled egg, having requested that the curry sauce coming with the egg be excluded.  It was beautifully plated, the lavender from the garden being used to add to the attractiveness of the dish, but the kingklip was too salty for my taste. 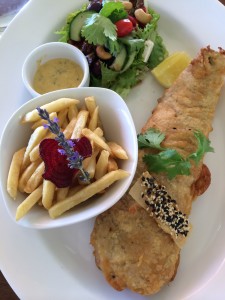 My colleague chose the battered hake and chips (R79), topped with a sesame crisp, also served with a garden salad, home-made tartare sauce, and crispy chips, and it was the largest piece of served fish I have ever seen.  We laughed when we saw the shape of a whale in the served hake!  My colleague Hadjirah had to take half of the dish home with her, it was such a large portion.

For dessert the steal of the meal was the Decadent Dessert ‘Medley’, which was a taster of each of the other dessert dishes, for an 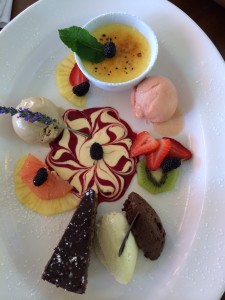 The winelist was neatly packaged in a bound folder, and each wine is explained in terms of flavour and aroma, but sadly no vintage information is offered.  At least one wine by the glass is offered per varietal, often the Rivendell wines, which is understandable.  The winelist is biased to Hermanus and Bot River wines, but other regions feature too.  Sparkling wines range from KWV Brut (R35/R122) to Domaine Des Dieux Claudia (R309).  Kanu is the entry level Shiraz (R107), and includes Rivendell (R48/R190), Boschrivier (R206), Raka Biography (R228), and Creation Syrah/Grenache blend (R293).  Winelist typing errors for Rupert & Rothschild and Bouchard Finlayson Galpin Peak reflect sloppiness, and are out of character for the Austrian perfection which Chef Thomas appears to strive for in his restaurant.

We received the bill in a neat white billfold, but unfortunately the bill was inaccurate, the kingklip special having being charged at the price of a standard (different) kingklip dish.  It took quite some time for the waitress and the manager to correct the bill, and to return it to the table.  It almost felt mean to question the incorrect kingklip charge, when overall the value offered for the prices charged is a commendable.  It was good to see Chef Thomas come out of the kitchen, coming to greet us, charring to guests at the other tables, and even bringing the owners to our table, to introduce them to us, a very nice touch!  Chef Thomas uses fresh and seasonal ingredients, and has been foraging for mushrooms under the pine trees on the farm.  One of his kitchen right hand men, Westler Collins, worked with Chef Eric Bulpitt at The Restaurant at Newton Johnson, and was part of Chef Eric’s foraging team.   Rivendell Restaurant enhances the slowly growing culinary offering of the Hermanus area (in addition to The Restaurant at Newton Johnson, Creation,  and @Food & Wine), which has been thin in the past.