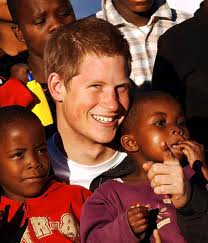 Jordan Estate and Graham Beck wines will be served at the Sentebale Gala Dinner at Summer Place in Johannesburg next Wednesday, launching a fundraising programme to build the Mamohato Centre for children and young persons in Lesotho.  Guest of honour will be Prince Harry.

The new Mamohato Centre is named after Lesotho’s late Queen Mamohato Bereng Seeiso, and will be built on what is said to be the birthplace of the Lesotho people.   The Centre will care for young persons whose lives have been affected by HIV, to build their self-confidence and improve their quality of life.

Prince Harry set up the Sentebale charity in 2006, in honour of his late mother Princess Diana and Lesotho’s Prince Seeiso’s mother, the late Queen Mamohato.  Princess Diana was well-known for her charity work, especially for AIDS/HIV awareness and prevention.

Graham Beck Wines is the official Cap Classique sponsor for the Sentebale Gala Dinner, while Jordan will sponsor their Barrel Fermented Chardonnay 2011, the Cobblers Hill 2009, and the Mellifera Noble Late Harvest 2011.

POSTSCRIPT 24/2: The Sunday Times reports today that Prince Harry’s girlfriend Cressida Bonas has accompanied the Prince on his visit, and may attend the dinner with him. ‘Top Billing’ presenter Bonang Matheba, wearing a Gavin Rajah creation encrusted with Swarovski crystals, will be the hostess for the evening, and singer Yvonne Chaka Chaka will entertain the 250 guests. ‘A five-course feast with an African feel’ will be served by caterer Vicky Crease, and will include crocodile, Karoo rack of lamb, and pistachio mousse.  Prince Harry may stay on to attend the South African wedding of Sir Richard Branson’s son Sam to the half-sister of Prince Harry’s girlfriend, Isabella Anstruther-Gough-Calthorpe, in two weeks time.

3 replies on “Top Cape wines to be served to Prince Harry at charity dinner!”