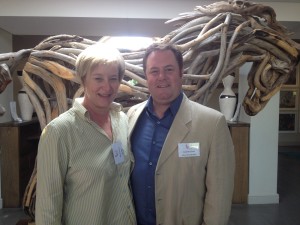 Yesterday was the second time that I had the privilege to attend the Best of Wine Tourism Awards, the 2014 awards presented to the winning wine estates at Vergelegen’s Stables restaurant.  The wine estate representatives were advised to not neglect the booming Chinese tourism generally, as well as wine tourism market specifically.

Cape Town/Winelands is one of ten members of the Great Wine Capitals Global Network, and within each of these geographic regions the wine estates compete for the honour to be named the best in the category.  Winners for 2014 were awarded as follows: Wine Tourism Restaurant (won by Camphors at Vergelegen), Art & Culture (Vergelegen), Accommodation (Babylonstoren), Architecture and Landscapes (Babylonstoren), Wine Tourism Services (Delaire Graff), Sustainable Wine Tourism Practices (La Motte), and Innovative Wine Tourism Experiences (Spice Route).  Vergelegen was named the overall South African winner for 2014, with two first places and four second places out of the seven awards (it did not enter the Accommodation category, not offering any).

I was lucky to sit next to Bradley Brouwer, SA Tourism Regional Manager 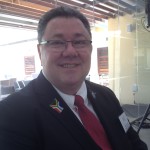 for Asia Pacific, who was the keynote speaker, especially as I had missed his talk, driving through from a function at Jordan Wines at that time. Bradley is very entertaining, and shared that he was first appointed to head up the Japanese SA Tourism office eight years ago. and on arriving at his hotel and offering a generous tip, the taxi driver threw the money back at him, the hotel explaining to him that is regarded as an insult to be given a tip, as the worker does not expect extra payment for a job he is paid to do anyway!  One should therefore not expect tips from Asian guests, he said.  His responsibilities grew to include Korea, Thailand, and Taiwan, and China was added four years ago.  He was an industry player when he lived in South Africa, up north, but he spent 16 years in Cape Town, and is often told to not push Cape Town so much, as he is meant to pay equal attention to all our provinces.  Bradley has achieved double digit growth in all his markets in terms of tourism, their Chinese website having grown from 12000 hits per month four years ago, to 1,2 million currently.  Tourist numbers have grown from 45000 per year four years ago, to 132000 per year now.

We spoke about SAA making a loss on the Johannesburg – Beijing route, being full inbound to Johannesburg, but not well occupied flying to Beijing, as locals are not encouraged to visit China.  Chinese tourists still prefer to travel in the safety of a larger group, but the number of independent travellers is increasing, he said.  They arrive with the goal of seeing ‘iconic’ landmarks, possibly not to us as locals, but important to them, and needing only a half hour power nap after checking in before they are ready to go sightseeing.  The icon list includes Robben Island, Boulders’ Beach, Nelson Mandela Square in Johannesburg, Table Mountain (since it won the New7Wonders of Nature), wine estates (and Babylonstoren specifically as it has signage in Mandarin and markets itself to this market).

The Chinese are a nation with a hard working ethic, he explained.  A media release relating to Bradley’s talk gave further information about the Chinese tourism market.  The number of Chinese tourists is expected to grow next year, as Chinese President Xi Jinping and our President Jacob Zuma have declared next year as ‘Year of South Africa’ in China.  ‘Research shows that China is set to become the biggest market in the world for wine after the US. With the preference still very much for  imported wines, now is the time for more South African producers to start capitalising on the growth in travel and the interest in wine’, he said.  Local wine estates should capitalise on the benefits of a growing Chinese affluence and interest in world travel by understanding their needs.  China is 14th on the list of South African wine export destinations, and Japan is in 16th place. Sales to both countries are increasing.

Chinese tourists are on a tight schedule and didn’t necessarily spend much time at each wine estate they visit, but do want to buy wine and memorabilia. ‘Visitors from Mainland China, for example, will generally travel for eight to 14 days. They come to South Africa for the scenic beauty, the culture, the history, the wildlife and, increasingly, for the wine and opportunity to play golf. They can accommodate no more than two wineries and they want to be hosted with efficiency and cultural respect. They want to taste, take pictures and buy wine, with the facilities readily available to courier their purchases back home. They are not interested in long narratives or being kept waiting‘. Visits to a wine estate typically is 45 – 90 minutes long.

Visitors want information in Mandarin for the Chinese, and similarly the Japanese and Koreans would like information in their languages.  The customs of the visitors should be respected, he advised: ‘Never take a business card and put it in your pocket. Take it with both hands and do not put it away until your visitors have left. Avoid black or white or black and white packaging as these colours symbolise death, as does the number 4′. 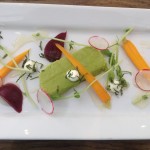 Stables Chef Gary Richardson offered a good lunch to the guests, his restaurant being fully booked for the event.  His starter was a pea parfait and goat chévre, young carrots, baby beetroot, red radish, pea shoots, and a Sauvignon Blanc reduction.  The main course choices offered were roasted 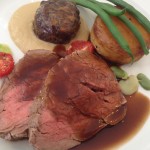 fillet of beef and oxtail faggot (offal) served with pomme fondant, smoked onion soubise (sauce), broad beans, and fine beans, which was my choice; or yellowtail and West Coast mussel with hutspot (a Dutch favourite of boiled potatoes, onions, and carrots), asparagus, lardons (pieces of bacon) and a saffron velouté.  The cheese course with a 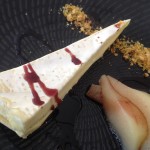 porcini and truffle scented Brie with poached pear, salted caramel hazelnuts, and a red wine reduction followed.  Last but not least was a beautiful dessert buffet, 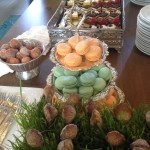 with sweet treats having been prepared by Chef PJ Vadas’ pastry team at Camphors, including chocolate eclairs, marshmallows,  and orange macaroons. 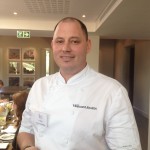 It’s been a good month for Chef PJ Vadas and Vergelegen, not only winning the Great Wine Capitals Global Network 2014 Best of Wine Tourism Awards, but also jumping into the Eat Out Top 10 list a year after opening the new restaurant.

I spoke to Sharon Hosking, Hospitality and HR Manager at Vergelegen, featured above with Andre Morgenthal of Wines of South Africa (WOSA), which organises the Great Wine Capitals Global Network in South Africa. She attributed their success to sticking to the basics. They have had a good awards run, but have never set out to win any. They did upgrade the two restaurants substantially, transforming the Lady Phillips tea room into Camphors, and creating Stables from their previous wine tasting centre, and creating a new tasting room.  Garth Stroebel was their consultant in terms of kitchen layouts, and menu design for Stables. It will be harder to maintain their current awards, she said.  She told me that they have a herd of about 350 Nguni cattle, for which Chef PJ has set up a butchery, for use in their restaurants.  Biltong and droë wors are being made, and will be sold from the Stables shop. We spoke too about the exciting developments down the lane at Morgenster, which will keep Vergelegen on its toes too.

Disclosure:  We received a bottle of Vergelegen Semillon Straw Wine 2011 and a bar of handmade nougat.