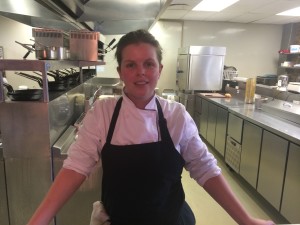 Julia Hattingh is the fourth chef at Franschhoek Kitchen since Holden Manz bought the previously named Klein Genot wine estate, and it was renamed after the owners’ surnames.  She is a breath of fresh air, and the restaurant will attract back customers, as Chef Julia settles in and takes the restaurant to a new level.

Security is stricter now, one having to fill in a sheet at the boom, but friendly.   One walks through the downstairs tasting room to get to the upstairs restaurant, and I chose the smaller room with the fireplace. Front of House Manager Cobi Bosch is new, and he and I did not gel at all.  He previously worked at Rhapsody’s at Cape Town International and in Bloemfontein.  I knew that Manager Wayne Buckley would pop in, and I did want to meet Chef Julia, which made me stay.  Cobi also served as the waiter on Monday.   He recommended to a neighbouring table what his favourite dishes are, in guiding them what to order (they ordered a cheese platter to share in the end), but did not offer me this service.   He brought two wine lists, one with Holden Manz wines, and the other with wines from their ‘friends’, being other wine estates in Franschhoek and one in Stellenbosch, telling me that the Chardonnay on the list was sold out already.  He seemed most put out when I requested butter instead of the bottles of Willow Creek extra virgin olive oil and balsamic vinegar, for the slices of olive oil bread which he had brought to the table.

Chef Julia arrived at Holden Manz about four months ago, having been connected to Franschhoek Kitchen by her former lecturer Chef David Higgs, when he ran a chef’s school at Meerendal.  From there she moved to Le Quartier Français, and then at Waterkloof, where she worked with Chef Greg Czarnecki for three years.  London called, and she worked at Michelin 1 star Rhodes W1, and at Michelin 2 star Alain Senderens in Paris, before returning back home.  This is her first job as Executive Chef, bringing with it an administrative responsibility, which she is very good at, Wayne said, not always a chef’s strength.   Chef Julia had just finished her first ‘Cook Franschhoek’ demos over the long weekend, the first time that she had done demos, and was pleased that the three demos had gone well.

We spoke about the vegetable and herb garden which had been started in the time of Chef Bjorn Dingemans, and Chef Julia said that she uses what the garden offers, e.g. spinach varieties, herbs, and butternut, and will get more involved in what is planted on the farm.  She is a big fan of Steve the Magic Man, who supplies what she needs.   She had to gel with her kitchen team, but has that behind her now.  Chef Julia is enjoying the freedom to create dishes that she likes to cook and eat, and the menu is a reflection of her favourites, she said, changing at least one dish per week, to keep the menu fresh.   She has created  a new picnic menu, and simplified the canapés served at weddings, Holden Manz being a very popular wedding destination, hosting a wedding every Saturday.

Wayne joined me with his friend Rick, and we had a good catch up about the restaurant scene in Franschhoek and Cape Town. Holden Manz has just launched Visionare, a blend of Cabernet Sauvignon, Merlot, Shiraz, Petit Verdot, Malbec, and Cabernet Franc.  The menu is neatly presented on an A4 board, with V and N marked against some menu items, but not defined on the menu as being Vegetarian and Nuts, respectively.   I ordered the Farm style terrine with a baby leaf salad, health bread, and pickles (R70), Cobi saying that the terrine 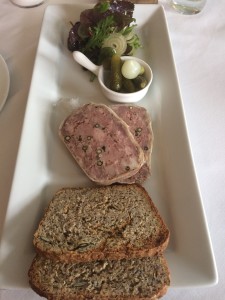 was made from pork when I asked him.  As his reply sounded uncertain, I asked him to check with the chef, and he returned saying that it was in fact warthog, pork liver, pork fat, and green peppercorns.  Other starter items are Forest Phantom artisan ashed goat’s cheese from Belnori (R70); Mozambican clam risotto prepared with Holden Manz Chardonnay, green olives, and saffron (R70); Jerusalem artichoke velouté with shiitake mushrooms, chestnuts, and truffle (R50); and oeuf en cocotte, a free range egg with garden spinach and miso wild garlic cream (R60). 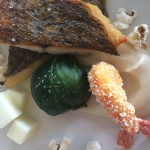 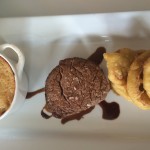 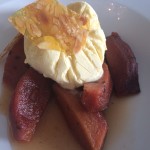 I ordered slow roasted quince for my dessert (R60), the course which Chef Julia made for her ‘Cook Franschhoek’ dish.   Using honey from Myles Agar, a tree feller in Franschhoek, Chef Julia created honey parfait, the delicious sweet creaminess off-setting the quinces and giving it an unusual yellow colour, with an almond brittle topping.   Wayne chose a colourful white chocolate exotique served with pineapple carpaccio, mint, and pink pepper (R60). Other desserts are garden orange crème 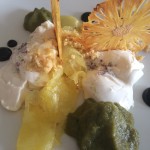 bruleé, with chocolate truffle and rosemary (R60); a cheese platter with local artisanal cheeses and home-made preserve (R110); and a platter of Franschhoek Kitchen Café Gourmand, being a Terbedore Franschhoek roasted espresso, and a selection of homemade soft creamy toffees and marshmallows (R40).   My dry cappuccino was perfectly made.

Chef Julia has brought a refreshing menu to Franschhoek Kitchen , very few of the dishes having been seen on any other local menu.  She is settling into the restaurant with her team, and can only grow and go from strength to strength.  Hopefully Cobi will shed some of his attitude.  Wayne refused to accept payment for my two courses.