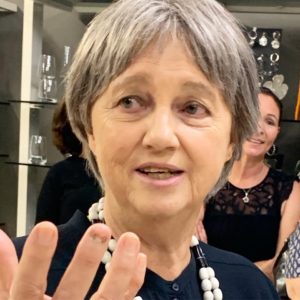 Last week a host of media representatives was invited to attend a celebration of the 30th anniversary of the Carrol Boyes company, an event at which founder, designer, and doyen Carrol Boyes shared with us the history of her evolvement as an artist, into building a functional art design company, creating a new homeward and lifestyle design every week.

We were shown the very first art work which sculpture art student Carrol Boyes had created 32 years ago, always with a functional purpose to her art, a skittle. When she started creating works to sell after completing her studies, she switched this around, creating functional items which were also pieces of art. Her first creations were jewelry, making them from clay. Her first commercial piece was made in copper, putting it in her pool to create a patina on it. She talked about making jewelry from cuttlefish, with the melted jewelry from her mother, grandmother, her own jewelry, and ex-partners’ gifts, the latter creating a giggle amongst those present, not being able to find other metal to melt over the Christmas period. Over time she progressed to pewter for her jewelry design, and then to silver. She sold her first creations at a stand on weekends, at Greenmarket Square.

Her next creative direction was creating cutlery, and we were shown her early pieces. She used pewter initially, but it was expensive and heavy. So she added stainless steel, progressing to using stainless steel only, and moved to stainless steel forged cutlery, sculptures, but dishwasher safe.

She progressed to cast aluminium next, for the bigger pieces, not being as expensive and heavy as stainless steel. Her first aluminium piece was ‘Woman in Tub’.

Over time Carrol designed items that linked to each other. For example, a bottle opener led to the development of a Carrol Boyes Collection of wines made in conjunction with her brother John Boyes and Neels Barnardt. I tasted the wines for the first time when the company launched its new chocolate truffle range last year. 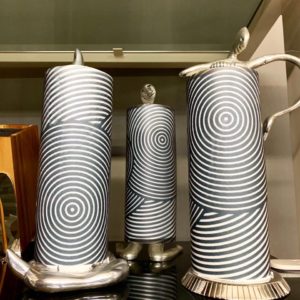 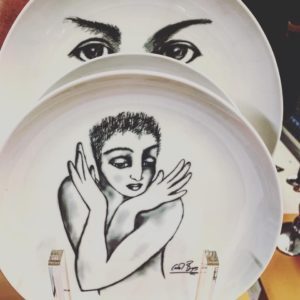 which toothpicks can be placed. We were shown new copper candlesticks. A bath and body range, as well as textiles, have recently been added to the Carrol Boyce range. 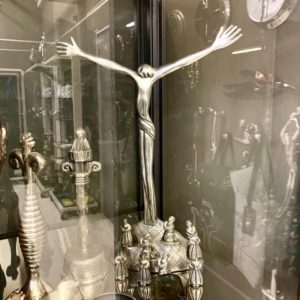 Carrol travels regularly, and where she goes, she finds inspiration, her major focus being the human form, as well as nature. When she traveled in Egypt, she saw wobble bowls, and created her own version of these. She told us honestly that these were not popular items, being too wobbly, so she amended them, giving them a flat base. In her designs she often manipulates the human form, to make the item functional, showing us a jug handle made of a woman’s 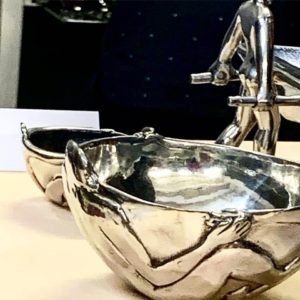 arm, but not physically realistic in the way it was bent for the handle.

We saw two works dating back to 1990, at the time when the late Nelson Mandela was released, and she created Peace bowls (left), one each in honour of Mandela and the other in honour of Archbishop Desmond Tutu, presented by her to these two South African iconic leaders.

I loved her reply to a question whether she feels burnt 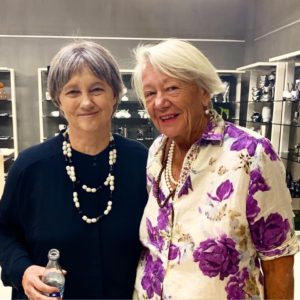 out after 30 years of design, saying that ‘ I still feel 20!’, a feeling I share with her, she and I being similar in age. She told us that she still has lots to say in her design work, she has learnt a lot over time, and there is more to learn. The business 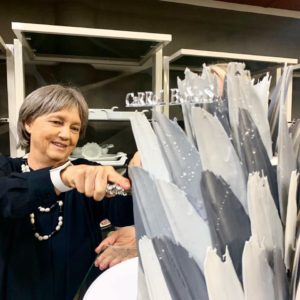 side burns her out, she said honestly, and she has let go of it, handing the running of it to CEO Craig Ludwig. She has learnt that life is all about balance.

A beautiful anniversary cake had been designed to celebrate this milestone, and we were allowed 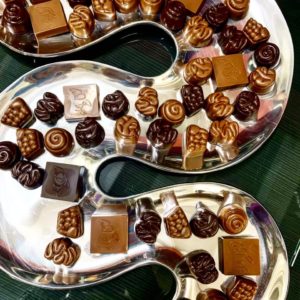 to taste a slice of it. On the table of eats was an S-Design platter with the fabulous milk and dark chocolate truffles made in-house, and sold in Carrol Boyes shops. There were mini muffins, fruit kebabs, as well as little glass portions of pannacotta, topped with a chocolate or with a berry 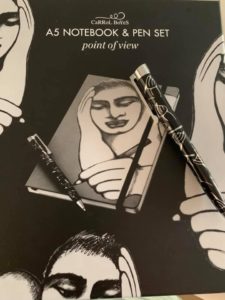 Disclosure: We were given a gift bag with a Carrol Boyes writing set, consisting of a notebook and a beautiful pen, as well as a gift box of Carrol Boyes milk chocolates.