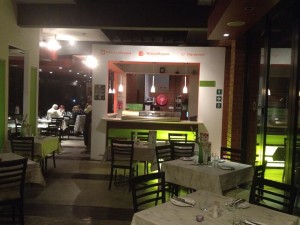 I had been led to believe that one of the better restaurants in Knysna is Sirocco, and I do recall having eaten there once before, when it was more of a fine-dining restaurant.  I was very disappointed when I spent part of my S&T allowance from the Department of Justice at Sirocco last night. 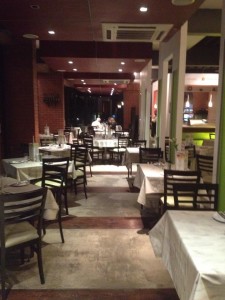 Loadshedding was not the only problem the restaurant had to cope with, Manager Sonia de Lange having shed her service ethic too!

I had popped in at Thesen Island earlier in the afternoon, and had a look at the fire-damaged Ile de Pain, speaking to staff at a neighbouring shop, and they recommended Sirocco.  When I visited Knysna a month ago, also with the compliments of the Department of Justice, I had experienced
dreadful service at three restaurants I had attempted to eat at, in particular at the Island Café at The Turbine Hotel & Spa! On Facebook a number of visitors to Knysna shared that the town appears to have a problem with restaurant service.

It was hard to see the entrance to the restaurant, as there is a Col’Cacchio now, and other outlets block the signage to the restaurant.  It is set at the water’s edge, but of course one cannot appreciate the view after 19h00 in autumn. 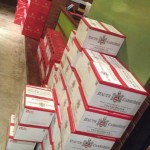 Lanterns light up the stairways, and a nice touch was a waiter coming to open the main door when I arrived.  I noticed a rather untidy collection of Haute Cabriere wine boxes at the entrance, as if they were still to be stored somewhere else, but may well have been placed there on purpose.  The A4 laminated menu contains full-page advertisements for leading wines Haute Cabriere, La Motte, Leopard’s Leap, De Wetshof, Beyerskloof, Diemersdal, Protea, and Buitenverwachting.

My former-Congolese waiter Yvon seated me, the 150-seater restaurant being very quiet, so I could choose a table with the best light. Lime-green dominates as a colour in the restaurant, used on the wall, and in the mock velvet upholstery of the chairs. The green is not used in staff clothing, a surprise!  Shocking for such an upmarket restaurant are the plastic table cloths and paper serviettes!  The salt grinder has lost its branding, while that of the pepper grinder will come off shortly too.  A poorly laminated and now peeling four-sided ‘document’ stands on each table, advertising beer, cocktail, and oyster specials. Cutlery is an unknown Eternum, and the branded fork did not seem to match the unbranded knife. I faced the Sushi kitchen, onto which wall is communicated the Twitter handle, the Facebook address, and that of TripAdvisor!

When I sat down Yvon had to do a lot of work to stabilise my table – had no one else sat at it for a long time? – and turn down terribly loud African-style music. He told me that the owners of the restaurant are Leslie Pieters and Charles van Tonder, who seem to be the restaurant monopoly of Knysna, owning not only Sirocco but also 34 South, The Drydock Food C0, and Tapas & Oysters! The GM is Andrew Korkie (not present), and the Chef John Hendrick (I assume that he was not present either)!  Manager Sonia came to my table, not introducing herself or her role, but I had been told that the manager was in the office doing admin, so I asked her if she was the manager.  I had just been given the menu, so had not even looked at it, and she asked me if she could help with anything.  I told her that I had not looked at the menu, and needed some time.  She hovered right next to me, and got annoyed when I asked her for some space, and to not call me ‘my dear’, a pet hate!  She told me that I was rude, and thereafter she left me alone and looked right through me for the rest of my time at the restaurant, except when she brought the oil lamp at the start of the loadshedding.  We were in complete darkness in-between the lights going off, and the generator for the collection of restaurants surrounding Sirocco kicking in, so I asked her of she did not know about the loadshedding, and should she not have brought the oil lamps to the table before the lights went out, the locals clearly knowing that they would be hit by Stage 2 loadshedding last night.  She said they don’t plan for loadshedding!   I stayed at the Protea Hotel Knysna Quays last night, and their management did not think it necessary to inform guests about the scheduled 20h00 loadshedding either.

Yvon brought two sections of a baguette, but they were inedible, with a sharp tang which probably was chili, but Yvon thought it might be black pepper.  The bread is supplied by 34 South in the Knysna Waterfront. He returned with a sliced sesame-seeded hamburger roll, and butter rectangles which looked as if they were the packaged mini butter portions, with the paper removed.

From the Sushi menu I chose a hand-roll with prawns and avocado, not being charged extra for the addition of the 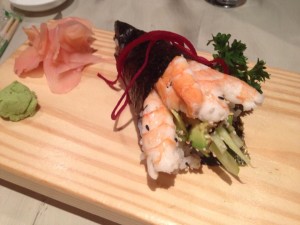 latter ingredient, a steal at R35.  It was the best presented dish of the three that I ordered, a thin ribbon of beetroot looking as if it was holding the roll together.  It had a few thin strips of cucumber too, but lacked sufficient mayonnaise to make it bind the four elements. Yvon had brought chopsticks, two soya sauces, and a steak knife, the latter working best to eat it.  There are many sushi options, including edamame beans (R30), 2 pieces of Nigiri (R38 – R40), tempura prawns (R40 for four, R60 for six), three pieces of sashimi for around R50,  and various platter options too.

The menu contains many dishes to choose from, and dishes are flagged as vegetarian, spicy, and Sirocco favourites. Light meals include a number of hamburger options (R62 – R86); pizzas range in price from R50 – R115; salads range from R58 – R86; Starters include mussels in white wine and garlic (R74), a Malay prawn starter (R78), and seared ‘Patagonic (sic) calamari’ (R68).

One page of fish dishes starts at R94, and includes West Coast ‘kreef‘ at an SQ price. Pasta dishes start at R76, 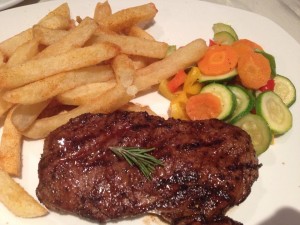 topping at R120 for a seafood pasta.  Meat dishes peak at R185 for venison, and the Karoo lamb shank is almost equally priced.  For the main course I chose a sirloin steak, which the menu said was served with ‘seasonal vegetables‘ and ‘old-style chips‘ (R115). I ordered a mushroom sauce on the side (R15), which was luke-warm when it arrived at the table.  The steak was prepared pretty rare but had been ordered as medium-rare.  The chips were sprinkled with a paprika salt, not specified in the menu and nothing ‘old-fashioned‘ about this, so they were sent back for fresh non-seasoned ones, arriving pretty ‘slap’! The vegetables were a non-compatible mix of red, green and yellow peppers, with cooked carrots and courgettes.

The pannacotta (R38) sounded the lightest of the dessert options, and as it was a close to 30ºC day on the Garden 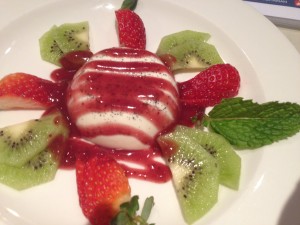 Route yesterday, it seemed a summery dish to order.  The description was misleading, promising that the pannacotta contained a mix of lemongrass, vanilla, and coconut, but at best there was some vanilla. It was also promised to come with a berry compote, which is meant to have berry pieces in it, but my dessert was just served with a berry syrup! Hard out-of-season strawberries, mint leaves, and kiwi fruit completed the plating, a slightly more professional-looking plate!  Desserts range from R32 for a trio of ice creams, to R110 for a cheese board. The dry cappuccino took some time to make, but was nice and strong Illy coffee, and filled with foam.

Yvon brought the bill when requested, in a grass-green Nedbank-branded bill folder, the colour being over the top relative to the subtle use of the colour in the restaurant decor.  The folder has seen better days.  It was a pleasure to tip Yvon, as he really tried hard to make up for the mistakes from the kitchen, and Sonia’s rudeness, mentioning that she has good and bad days, yesterday clearly not being a good one for her!

I had to Google the meaning of ‘Sirocco‘, which Google defined as a ‘hot wind, often dusty or rainy, blowing from North Africa across the Mediterranean to southern Europe‘. I could not make the connection between the name and the interior decor (the colour green not communicating this definition).  On the menu the pay-off line is stated as ‘Immerse your senses’, but this is not explained, and it is not understandable how it relates to or describes the restaurant!

No one accompanied us out to our cars with torches, there being no lighting beyond the restaurant, and the parking area being in darkness, making one feel disorientated. Sirocco is mediocre to poor, and one cannot understand why it is rated so highly, other than there being few better eating options in Knysna. The food is not well prepared nor plated, the menu dish descriptions are misleading, and the manager does not like her job and her patrons.  On the plus side is the friendly waiters who really try hard, the location for day-time eating, and the reasonable prices.

6 replies on “Restaurant Review: Sirocco in Knysna more than loadshedding problems, service-shedding too!”